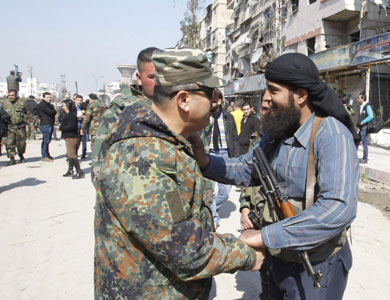 Daraa is returning to peace.  The summer saw heavy clashes between illegal armed groups and the Syrian Arab Army (SAA) in Daraa al-Balad, the old section of Daraa, which sits on the border with Jordan and Israel.

About 900 men belonging to illegal armed groups have laid down their arms in a Russian mediated peace deal, which has brought stability to Darra.

These men are battle weary and want to rebuild their lives and homes in Daraa.  They have begun to work alongside the SAA to restore peace and stability throughout the area. The SAA is the national army and is comprised solely of Syrian citizens.  The SAA and the former armed militiamen have much in common but had been divided by foreign interests, who are using the Syrian people as pawns in an international chess game.  Under the terms of the peace deal, Russian police will patrol the area, and the SAA and men who surrendered their arms will perform joint security duties at checkpoints.

The Russian Reconciliation Center for Syria, officially known as the Centre for Reconciliation of Opposing Sides and Refugee Migration Monitoring in the Syrian Arab Republic, has been making deals that defuse tensions, and create a safe place for Syrians to return home and rebuild their lives after years of fighting and destruction.  The goal of the SAA and their Russian allies is to clear all areas from terrorists and illegal armed groups.

A Russian-mediated deal in 2018 had allowed some armed men to remain in Daraa, while they participated in security, but the deal was periodically marred by breaches as the armed men violated the terms and assassinated soldiers of the SAA.

Those men who chose not to surrender their arms recently were allowed safe passage to the north of Syria, to areas under terrorist control.  They had initially requested to be sent out of the country, to Turkey or Jordan, but this was not fulfilled.

Some of the terrorists are said to be hoarding large amounts of US dollars, presumably paid to them from the US military base in Jordan, which had been the training and supply center for terrorists following Radical Islam and fighting the Syrian state and the Syrian civilians for ‘regime change’ since 2011.

Sections of the Syrian border in the north are occupied by the Turkish military and their militia following Radical Islam.  The men from Daraa were afraid their cash would be confiscated by terrorists, such as Al Qaeda, who holds Idlib in the northwest.  Once the men arrived in the north of Syria they could pass freely into Turkey, and from there take one of many smuggling boats to Greece, and then move into Europe, using their cash to easily finance their trip.  Once in Europe, the men can apply for refugee visas to the US and Canada or can take advantage of the lucrative benefits available in Germany.

The “Arab Spring” hit Syria in March 2011.  In Egypt, protests broke out in the capital, Cairo.  However, in Syria, the initial protests began in a small, insignificant border town known for agriculture.  What would make Daraa different than Damascus, the second-largest city in Syria, and the cultural and political center of the country?

The difference is that Daraa is on the Jordanian border.  It is its geographical location that marked it as ‘ground zero’ for the coming onslaught of terrorism and destruction beginning in March 2011.

Jordan is a US ally, and an Israeli ally.  Syria and Israel are technically in a state of war.

In 2017 President Trump cut the funding of a multi-billion-dollar project by the CIA, which paid salaries, and provided training and weapons to terrorists following Radical Islam.  They were the ‘boots on the ground’ for the US-NATO plan for Syrian ‘regime change’.

President Trump tried to shut down the US military involvement in Syria, but the Pentagon refused to allow it, and the Pentagon got its way.  The CIA’s Syrian slush-fund was zero, but the Pentagon’s books were still open with a healthy account for ‘boots on the ground’ which were not American troops.