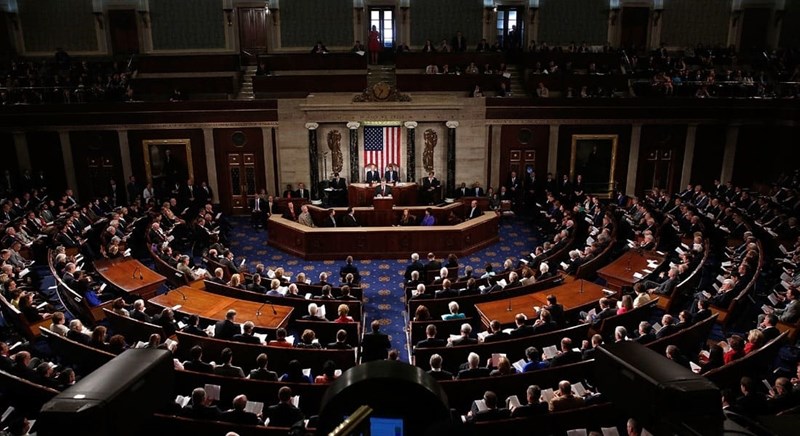 The US political website “The Hill” published a report which unmasked “simmering internal tensions” in the Democratic Party.

According to the report, the Democratic infighting began when liberals stood against moderates in the debate over the scope and strategy surrounding Biden’s two-pronged domestic agenda.

Moderates demanded the House vote on the Senate-passed infrastructure bill next week, hoping to separate that bipartisan proposal from the Democrats’ multibillion-dollar social spending package, which has no Republican support. Liberals, on the other hand, believe that the two packages should move in tandem to ensure that the larger, more contentious social benefits legislation reaches Biden’s desk.

President Biden, as well as House Speaker Nancy Pelosi, appear to have reluctantly agreed to the House amendment. Meanwhile, the Progressive Bloc, a powerful wing of the Democratic Party in Congress, rejected the Senate’s “conciliatory formula” and threatened to vote against it, the report added.

As a result, Pelosi began using campaign techniques and material support to persuade the bloc to change its stance and back the project.

The Hill also mentioned that Pelosi met with Pramila Jayapal, the representative for the Seventh District in Washington State and the new co-chair of the Congressional Progressive Caucus (CPC) on Tuesday, attempting to persuade her not to oppose the program. However, Jayapal rejected Pelosi’s proposition.

After the meeting, Jayapal said, “I reiterated our long-held position that we are going to be delighted to vote for both bills once the reconciliation bill is passed and [we] deliver both bills to the president’s desk.”

“I don’t think the Speaker is going to bring [an infrastructure] bill up that is going to fail. … At the end of the day, if we don’t have the reconciliation bill done, the infrastructure bill will not pass”,  Jayapal added to reporters.

Simultaneously, Pelosi assured a Sept. 27 vote on the  $1 trillion bills of public works projects that have already passed the Senate.

Earlier, Liberal Democrats temporarily blocked a short-term government funding bill, known as a continuing resolution, to protest the inclusion of funding for “Israel’s” Iron Dome missile defense system. The impasse is a prominent reminder that the Democrats’ majority is a fragile one — and that Biden’s domestic policy wish list can be upended by just a handful of rebellious defectors.

To protest the inclusion of funding for “Israel’s” Iron Dome missile defense system, Liberal Democrats temporarily blocked a short-term government funding bill known as a continuing resolution, according to the report.

The report added that the impasse serves as a stark reminder that the Democrats’ majority is precarious — and that Biden’s domestic policy wish list can be upended by a small number of rebellious defectors.

“Israel’s” ire mounted over the US pulling funds from the Iron Dome. Meanwhile, Israeli officials, speaking on the condition of anonymity to Axios, blamed the development on previous Israeli governments led by Benjamin Netanyahu, accusing him of undermining American bipartisan support for “Israel”.

On his account, Israeli Minister Ze’ev Elkin stated tersely that “the crisis between Israel and the democratic party is an accumulating process of many years”.

“The Democratic majority leader and House speaker have promised that aid will pass quickly and it is a technical dispute, but it once again highlights how important the bipartisan relationship is,” Elkin stressed.

The Iron Dome is a mobile air defense missile system developed by RAFAEL, a company for advanced defense systems. The system is designed to intercept short-range missiles and artillery shells.

How does the Iron Dome work?

The need for an air defense system to protect “Israel” from short-range missiles emerged after the Israeli aggression on Lebanon in July 2006, when Hezbollah launched more than 4,000 of mostly short-range 122 MLM Grad rockets, which fell in northern occupied Palestine.

However, the commander of the 81st Technological Unit, Israeli General Yossi Langotsky, considered that the Iron Dome had proven ineffective, showing its incapacity to counter the rockets launched by the Palestinian Resistance.

Despite the Iron Dome’s 90% claimed success rate, the Palestinian Resistance was able to bypass the highly advanced technology by adopting certain tactics that deceived the system, by overwhelming it with a large number of advanced missiles.

“We utilized the tactic of firing the Sijeel missiles at Askalan, which have a high destructive power and succeeded in overcoming the Iron Dome,” said al-Qassam Brigades.