Home Politics Middle East The Policy of Neglect; Behind the Walls of the Occupation Prisons 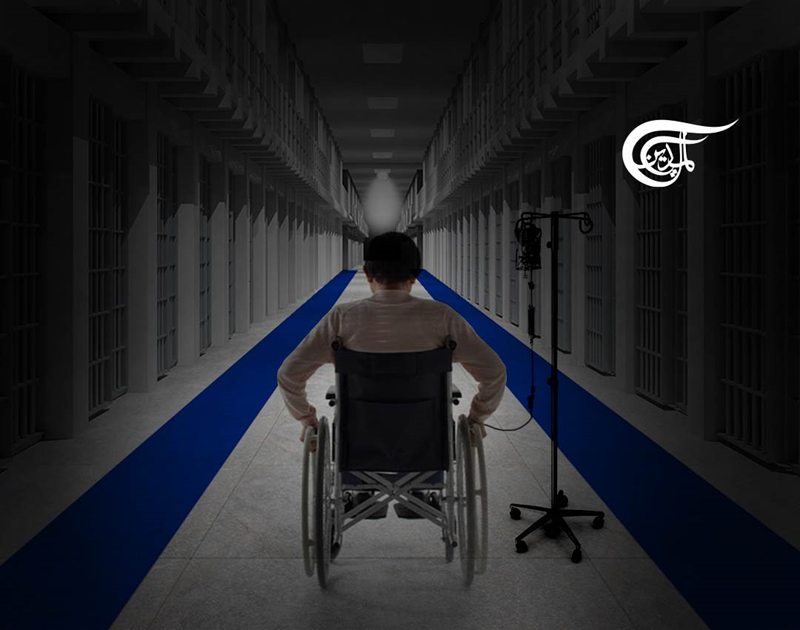 Behind the walls of the Israeli occupation prisons, Palestinians are always exposed to aggression and brutality under the Israeli apartheid regime. As a result of neglect and abuse, some freed prisoners with forsaken medical cases are reported dead shortly after their release, and others are reported dead inside the prison.

The methods to weaken both the will and the body are a tragic duality practiced amidst an Israeli political and judicial system that legitimizes torture and psychological pressure against Palestinian and Arab prisoners.

According to the Addameer Association for prisoners’ support, there are 4,650 Palestinian prisoners in Israeli occupation jails, including 200 children and 520 administrative detainees held without trial or charges.

The latest victim of negligence

The most recent case was reported on Wednesday after a Palestinian man diagnosed with cancer was medically neglected, resulting in his death.

The released Palestinian prisoner, Hussein Masalmeh, 39, was reported dead by the Commission for Detainees and Ex-Detainees’ Affairs on Wednesday night.

A statement by the Commission stated that the Israeli occupation’s medical negligence resulted in Masalmeh’s martyrdom.

They revealed that the prisoner spent 19 years of his 20-year sentence in prison, beginning in 2002 until February 14, 2021, when he was released to his painstaking medical journey in the Hadassah Hospital in the occupied city of al-Quds for seven months.

A week ago, he was transferred to Istishari Hospital in Ramallah where he died as a result of Israeli negligence.

Hussein Masalameh complained of abdominal pains for two months, while incarcerated in “Israel’s” southern an-Naqab prison, before he was admitted to the Soroka Hospital to be treated for what was later diagnosed as blood and bone marrow cancer.

Prisoners are subjected to systematic brutal physical and psychological torture methods, which harm and weaken their bodies. These methods include denial of access to real medical care, delaying the provision of treatment to sick and injured prisoners, oppression, humiliation, and torture, followed by fierce interrogations.

The Commission revealed that more than 500 male and female Palestinian prisoners in Israeli jails suffer from illnesses and diseases, which include severe cases of cancer.

Prisoners’ testimonies revealed that “200 prisoners are suffering from chronic illnesses, 25 from cancer, and 85 from various disabilities (physical, mental, psychological, and sensory), while the remaining 25 prisoners permanently reside in the clinic of Ramleh prison”, according to the Commission.

According to a report by the United Nations, “206 Palestinian prisoners and detainees died in Israeli jails as a result of cruel treatment and harsh conditions; 71 died as a result of torture; 54 died due to medical negligence; 74 were assassinated after detention.”

The Israeli occupation prisons’ administrations continue to delay the transfer of incurable cases to hospitals, and if they are ever transferred, it would be with their hands and feet handcuffed, not to mention the harsh and cruel treatment they are subjected to. According to the Commission of Detainees and Ex-Detainees’ Affairs, ill or injured prisoners are transported in unsanitary closed cars, instead of properly sanitized ambulances.

Factors that could increase the number of ill prisoners

The factors that contribute to consolidating the policy of deliberate medical negligence are many, and they include delaying providing treatment and committing medical crimes. The policy of neglect adopted by the occupation forces means neglecting their responsibility in providing the necessary medical care for prisoners.

Other factors include the abstinence from maintaining hygiene in the prisons necessary for the wellbeing of ill patients. There are no reports whatsoever of ensuring healthy and clean environments for prisoners. In the same context, no measures are taken to prevent insects and rodents from swarming into the imprisonment areas.

Another factor is overcrowdedness in cells and the absence of isolation rooms for patients with infectious diseases, such as acute and infectious viral intestinal infections and scabies, which threaten the health condition of fellow inmates.

Moreover, punitive measures are taken against the prisoners, which worsens their psychological conditions, and they can be summarized by the delays in transferring them to specialized external hospitals, denial of visits, sudden night searches, placing prisoners in solitary confinement cells, and forcing prisoners to take off their clothes in a humiliating and degrading manner.

Furthermore, the prisons lack any auxiliary medical devices for people with special needs, such as prosthetic limbs for amputees, medical glasses, and breathing devices and nebulizers for patients with asthma, chronic bronchitis, and other pulmonary diseases.

Female prisoners of course do not get any kind of special treatment in Israeli occupation prisons. According to the Commission of Detainees and Ex-Detainees’ Affairs, female prisoners suffer from the absence of any gynecologist or female specialist or assistant, especially for pregnant prisoners who need regular follow-ups.

This only leads us to the injustice of forcing pregnant female prisoners to give birth with their hands and legs cuffed, without any consideration for the prenatal and postnatal care required, not to mention their suffering during labor.

Anhar al-Deek, a 25-year-old Palestinian prisoner, is one of many women in Israeli prisons who had to go through tough pregnancy circumstances until she was conditionally released from an Israeli prison before giving birth. She sent a message that described her sufferings in captivity, which caught the attention of the international community and triggered public opinion, thus pressuring the Israeli occupation to release her.

“What shall I do if I give birth while I’m away from you (her family)? I am handcuffed and you know how cesarean operations are [difficult enough] outside prison, so how [do you think it’ll be] in prison, with me handcuffed and alone?” Anhar wrote in agony prior to her release.

Israa Jaabis is another prisoner that has been suffering from medical neglect in the occupation prisons for 11 years since her arrest. Jaabis has third degree burns all over her fragile body, which she sustained after her car exploded near an Israeli occupation checkpoint in 2015. As a result, she was charged with attempted murder.

In a statement to her lawyer, she mentioned that the Israeli Prison System (IPS) did not provide her with the proper health care necessary for her treatment.

Even teenagers are not spared

In a statement from Ofer Prison to Addameer Association, an 18-year old teenager revealed his suffering inside the occupation prison. The boy stated that the doctor in the occupation prison only made quick tests after he started suffering from severe stomach pain. The doctor only gave him pills to help with the pain, which only worked at first. But after he was admitted to the clinic again, the medical staff said he was dehydrated. Yet after his release, he was struck with severe pain, and he was diagnosed with appendicitis that led to an infection spreading all over his body after his appendix burst. This is only one example of a series of easily avoidable prolonged agony the prisoners have to go through due to the maltreatment and negligence of the Israeli occupation in prisons.

“It turned out that my appendix had burst and an infection spread throughout my abdomen”, he revealed.

The 22-year-old wounded prisoner, Ayman al-Kurd, from occupied al-Quds, who received a 35-year prison sentence, is yet another example of the Israeli occupation brutality.

Al-Kurd now suffers from paralysis in his lower limbs, moves in a wheelchair, and lives in extremely difficult, agonizing health conditions in the Ramle Prison Hospital, following a rampage by the Israeli forces who shot him 13 times at close range.

Statements from behind the prison walls

Several prisoners shared statements with the Commission from inside the occupation prisons. They emphasized that prisoners live under difficult conditions without taking into account their physical and medical situation, in addition to being subjected to continuous physical assaults and psychological pressure.

In a statement from the Gilboa Prison, from which 6 prisoners managed to break out, Prisoner Amir Makhoul stated that the administration medically neglects around 70 prisoners that require immediate professional aid, some of whom suffer from hypertension, diabetes, and other chronic diseases.

Prisoner Bilal Zayed said that the number of medical cases in Megiddo Prison that require immediate and serious healthcare exceeds 300. He also mentioned that some detainees who arrive in the prison suffer from depression, introversion, and lack of self-esteem due to the applied interrogation methods that involve psychological and physical torture, solitary confinement, degrading treatment, and verbal abuse.

The Israeli occupation has always violated the basic humanitarian laws and the laws endorsed by the Geneva Conventions, precisely the Fourth Geneva Convention, and continues to do so by adopting the policy of medical neglect towards the Palestinian prisoners suffering under the occupation.

The IPS continues to violate the relevant provisions of the Geneva Conventions by neglecting the basic medical needs of prisoners. In contrary to the Fourth Geneva Convention, the occupation deprives Palestinian prisoners of family visits, clothing, and blankets during the cold.

A report by the United Nations mentions that, in 2014, the Israeli occupation issued new “legislations” against Palestinian prisoners that include “forced feeding during hunger strikes, increasing the punishment for children up to 20 years of imprisonment, denial of secondary and higher education, the illegal fighter law, torture, and the imposition of unaffordable fines on prisoners”, all of which are in violation of the adopted Fourth Geneva Convention.

What is the Fourth Geneva Convention?

The Fourth Geneva Convention was adopted by the Diplomatic Conference for the Establishment of International Conventions for the Protection of Victims of War held in Geneva, as one of the four treaties signed in 1949.

The Geneva Convention IV stipulates protecting the people “who, at a given moment and in any manner whatsoever, find themselves, in case of a conflict or occupation, in the hands of a Party to the conflict or Occupying Power of which they are not nationals”.

What does the Geneva Convention IV State?

Under the Convention, article 76 states that prisoners and detainees “shall, if possible, be separated from other detainees and shall enjoy conditions of food and hygiene which will be sufficient to keep them in good health, and which will be at least equal to those obtaining in prisons in the occupied country.” It also states that all prisoners should receive the proper medical attention based on their health conditions.

Article 85 emphasizes that the detaining power should take the necessary measures to ensure that proper accommodation is offered, which includes a safeguard from humidity, sufficient sleeping space, and ventilation.

Articles 91 and 92 of the Geneva Convention IV emphasize that prisons should include a proper infirmary, with the presence of a qualified doctor, in addition to medical inspections at least once a month in order to monitor the nutrition of prisoners and to detect any contagious diseases.

With the Geneva Convention IV put on hold, and with easy comparison to how the Israeli occupation treats the Palestinian prisoners, one cannot but ask: Why is the Israeli occupation not held accountable for its acts? Why is it not convicted of committing war crimes over the endless violations of humanitarian laws? Until they are held accountable, Palestinian prisoners will continue to suffer under the injustice of the occupation.