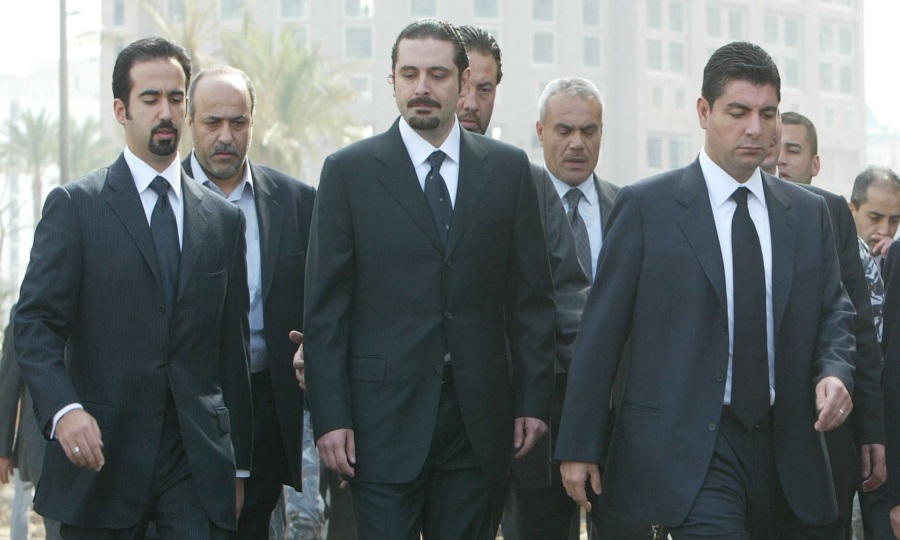 Reports that Ayman Hariri had been asked to leave Saudi Arabia after his home was confiscated appeared in Al Akhbar.  He is now said to be living in Abu Dhabi, where his half-brother Saad lives.  Saad and Ayman were partners in the Saudi Oger Company, which their father had founded in 1978.  Ayman sold his share to Saad in 2008.  In 2010, Forbes ranked Ayman No. 22 among the richest Arabs, and by 2012 his worth was estimated at $2.15 billion.  However, after the company became bankrupt, owing $4 billion, the assets were confiscated by the Saudi government under legal orders, and they were sold at public auction.  Recently, there have been some denials reported as well concerning Ayman, his home, and deportation, so the full story is a bit murky, like much of the Hariri dynasty.

Rafik Hariri, 1944-2005, started life in Sidon, Lebanon, the son of a humble family.  He learned bookkeeping in Beirut and met an Iraqi, Nidal al Bustani, and they married in 1965.  He and his wife lived in Saudi Arabia, where he became friends with Crown Prince Fahd.  Rafik and Nidal had three sons born in Saudi Arabia: Bahaa El-Din, born in 1966, Saad El-Din, born in 1970, and Houssam, who was born in 1971, and died in 1990 in Massachusetts while studying at MIT.

While the civil war in Lebanon was raging, Rafik Hariri and his wife and sons were safe in Saudi Arabia, where Rafik had begun a transformation from a bookkeeper to a  construction contractor, with the help of Crown Prince Fahd.

Rafik and Fahd became close business and personal associates. About 1975 life changed dramatically for the Hariri family, as Rafik and Nidal divorced, and she married Crown Prince Fahd, who then was crowned King in 1982.

The three oldest Hariri boys were raised in a Royal household in Saudi Arabia while maintaining ties with their father, who by then was a successful contractor.  Rafik married for the second time to Nazik Audi in 1976, who was a Palestinian living in Lebanon. They had four children together: Ayman born 1978, Fahd born 1980, and two daughters, Joumana, and Hind.

To demonstrate the extent to which the three eldest Hariri boys identified with their step-father, King Fahd, when the King died in 2005 Saad Hariri said publically that he mourned the death of his ‘second father’.

By the time Rafik returned to Lebanon, he had been living in Saudi Arabia for about 30 years. He returned home to a devastated country, and as a successful businessman, he felt he could help Lebanon’s recovery.

After Rafik died in 2005, his sons inherited stakes in Saudi Oger, and Ayman, Fahd, and Bahaa sold them to their brother Saad in 2008.

Saad Hariri became Lebanon’s Prime Minister in November 2009 and held the position until June 2011. In December 2016 he again became Prime Minister.  Countrywide protests began in 2019 accusing the ruling political elite of corruption and mismanagement. The country slid further into financial and social collapse.  Saad was not able to form a new government and resigned and left for Abu Dhabi on July 16, 2021.

In November 2017, while on a visit to Saudi Arabia, Saad unexpectedly resigned as Prime Minister in a staged video that left many wondering about his safety there. President Aoun refused the resignation, and President Macron of France intervened to negotiate Saad’s return to Beirut, where he rescinded his resignation.  Details of his ordeal in Saudi Arabia are unclear.

Saad had tried to follow in his father’s footsteps but failed in business and politics. During his first self-imposed exile in 2011, he resided in Paris, but due to his half-sister’s court order against him there, he chose Abu Dhabi as his new home.

Hind Hariri, Saad’s younger half-sister, has gotten three court orders in Paris against her brother, to recover 80 million US dollars owned to her. In one order, she has the right to confiscate his private plane, should it land in any EU airport.

Bahaa Hariri, the firstborn son of Rafik, has been based in London for 37 years, with an official residence listed as Cologny, Switzerland.  In 2002, he founded Horizon Group Holdings, a property development company, with projects in Lebanon, Jordan, and Saudi Arabia.

Recently, Bahaa appointed a Washington lobbyist group, CT Group, to represent his interests. It is thought to be part of his new project in Lebanon, Sawa Li Lubnan (Sawa).

Sawa is a group that is mobilizing citizens to campaign for meaningful reform in Lebanon to eradicate corruption and promote economic prosperity.

“Political office is not for me,” said Bahaa in an interview with ‘Arabian Business’ in July.

The grassroots movement aims at a new non-sectarian system, which can end corruption and stimulate economic re-birth. All regions in Lebanon and all religious groups are to be brought together with industry experts.

“We need to reach by consensus across the board to crush corruption… it’s endemic and it’s killing the private and public sectors. To gain a thriving economy we need to address many points such as debt restructuring and a single convertible exchange rate,” said Bahaa in the interview.

Bahaa Hariri has been successful and maybe the son of Rafik Hariri is best suited to firmly walk in his father’s footsteps.  Just as his father came to the rescue of Lebanon after the devastation of the 20-year civil war, it appears Bahaa is hoping to lead Lebanon to recovery from the worst financial disaster of any country in the last 150-years, according to the World Bank. Only time will tell if, ‘The apple doesn’t fall far from the tree.’