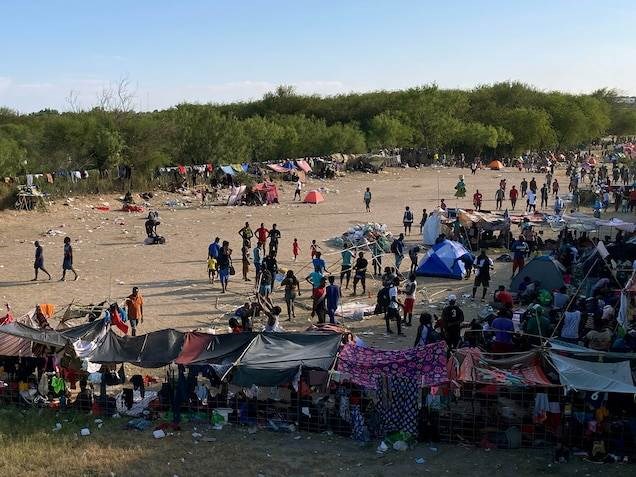 Nearly all of the 15,000 Haitian migrants who had been at the US-Mexico borders for days, seeking asylum, have left the camps they set up after abuse from the United States and a deal with Mexico. Mexico’s deal was with the migrants ‘causing a crisis in Mexico’ after the United States turned them back.

At Ciudad Acuna, a Mexican city just across the US borders, migrants were seen packing up and getting into vans as they were being transported into shelters.

Only a few hours beforehand, Washington had announced that no migrants who were ‘camping illegally’ under a bridge on the Texan side of the border were still there, saying they had either left or “been removed.”

“As of this morning, there are no longer any migrants at the camp underneath the Del Rio bridge,” Homeland Security Secretary, Alejandro Mayorkas, told reporters at the White House.

Mayorkas added that the United States flew some 2,000 Haitians back to their country on 17 expulsion flights, saying the rest had been moved to processing facilities along the border. He declared that most of them would be returned to Haiti from there.

Haitians had been flocking to the United States border after consecutive crises struck their country, from a political crisis manifested by the assassination of their president to a natural disaster that saw over 2,200 dying.

The Homeland Security Secretary said an estimated 8,000 Haitian nationals had ‘voluntarily’ returned across the border to Mexico while 5,000 are pending.

Migrants at the shelter were assured that they would not be detained nor deported, as per Felipe Basulto, the city council secretary of Ciudad Acuna. He also assured them that they could freely move around the city “with complete confidence.”

Basulto asserted that the Mexican government would try to resolve their immigration status while they are in the shelter administered by the National Migration Institute.

The relocation followed a complaint by Mexican President Manuel Lopez Obrador, who said he did not want his country to become “a migrant camp.”

“We want the underlying problem to be addressed,” said Obrador, urging Washington to invest in economic development in Central America, so that people do not need to resort to migration as a means of escaping poverty.

The Haitian migrants have been subjected to abuse and mistreatment by US border guards, who mounted their horses and swung their reins at migrants as a means of threatening them and pushing them back toward the Rio Grande.

This put the Biden administration under fire, as it promised an end to the ‘hateful’ and ‘xenophobic’ laws President Biden attributed to the Trump administration.