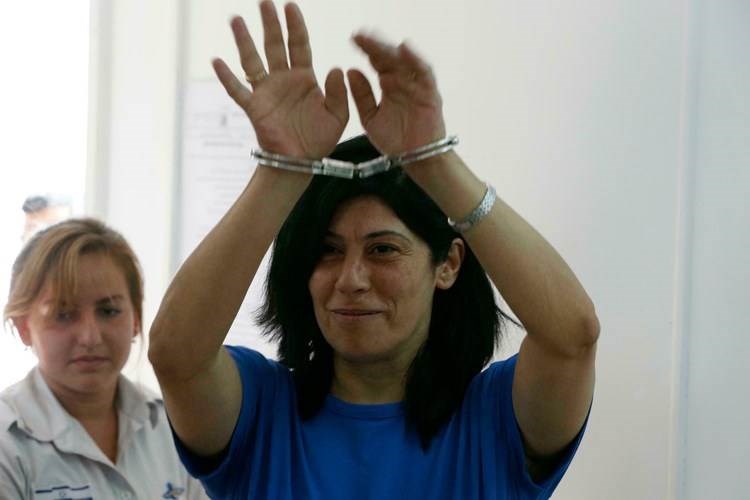 On Sunday, the Israeli authorities released a leading figure of the Popular Front for the Liberation of Palestine (PFLP), Prisoner Khalida Jarrar, from the occupation prisons.

The PFLP called for wide participation in the celebration held for Jarrar’s liberation, starting from today Sunday, at the Catholic Church hall in Ramallah, until Wednesday evening.

Last July, the occupation forces refused to release Jarrar to allow her to participate in the funeral of her young daughter, Suha, who died of a severe heart attack.

Upon her arrival in Ramallah, Jarrar went straight to the city cemetery to recite Quranic verses (Al-Fatihah) at her daughter’s tomb.

A campaign was launched on July 12 to demand the release of Jarrar, calling for local and international pressure on the occupation prisons administration to release Jarrar so she can bid farewell to her daughter. Although she had been in prison for two years and was supposed to end her sentence in two months, the Israeli occupation revoked all appeals to release her.

Hamas leader Ismail Radwan offered his “warm congratulations to comrade Khaleda Jarrar, a deputy in the Legislative Council and member of the Political Bureau of the Popular Front for the Liberation of Palestine, on the occasion of her release from the occupation prisons after a two-year sentence.”

Radwan said in a press statement that Jarrar exhibited utmost patience and steadfastness in the most difficult and harsh conditions, acknowledging her fight to preserve the principles of the Palestinian people. He also confirmed that all detainees are a priority until they attain their freedom.

The released PFLP leader was arrested several times, and a deportation order and travel bans were issued against her, not to mention that she was subjected to several forms of persecution and punishments due to her political activism and national role.