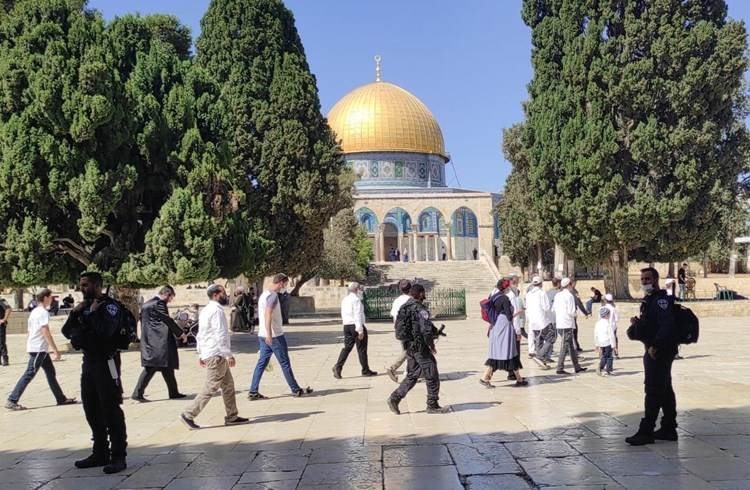 On Sunday, hundreds of settlers stormed the courtyards of the blessed Al-Aqsa Mosque through the Mughrabi Gate, under the protection of the Israeli occupation forces who arrested two Palestinian women and summoned one of the Mosque’s guards for investigation.

This came on the occasion of the “Sukkot” holiday and in response to the call of extremist Jewish organizations to carry out massive incursions into Al-Aqsa Mosque.

The settlers carried out the incursions in large and successive groups, and they prayed collectively and individually during the storming, guarded by the occupation officers and police.

Moreover, on Sunday afternoon, the occupation forces stormed the Shuafat Refugee Camp in Al-Quds and fired stun grenades and tear gas canisters at the homes of citizens.

Al-Quds is witnessing a state of tension, after the martyrdom of at least four citizens as a result of the occupation forces targeting an agricultural house in the village of Beit Anan, northwest of Al-Quds.

The occupation forces carried out acts of aggression at dawn, on Sunday, in the West Bank and occupied Al-Quds, which led to the martyrdom of several Palestinians.

Israeli media reported the assassination of 4 Palestinians, two of whom were martyred in a large-scale military operation in the town of Burqin.

The occupation forces admitted that two Israeli officers were injured during the Jenin confrontations.