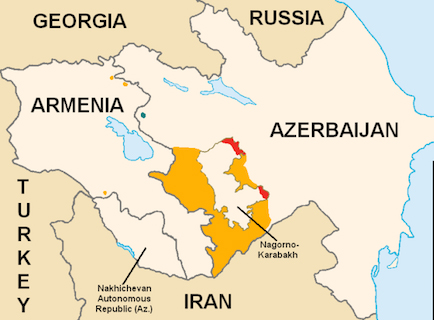 Iran conducted military exercises near its border with Azerbaijan on October 1.  The tensions between the two neighbors were caused by Israel and Turkey, who are allies of Azerbaijan and play divisive roles.

Azerbaijan’s President Ilham Aliyev commented he was surprised by Iran’s military drills; however, his country hosted joint military drills with Turkey and Pakistan beginning on September 21, in what was dubbed the ‘Three Brothers-2021’.  Turkey has the second-largest NATO army, and Pakistan is a nuclear power.

Azerbaijan’s Foreign Minister Jeyhun Bayramov met with his Iranian counterpart Hossein Amir-Abdollahian on September 23, on the sidelines of the United Nations General Assembly. Later, Amir-Abdollahian commented that ‘third parties’ were causing divisions between Iran and Azerbaijan, in a reference to Israel, who is a close ally of Azerbaijan, who shares a 700-kilometer border with Iran.

Tehran is also worried about the presence of “terrorist forces that came to the region from Syria.”  Last year, Turkey delivered Radical Islamic terrorists from Syria to Azerbaijan during a military confrontation with Armenia.  The terrorists had been affiliated with the Al Qaeda branch in Syria, which occupies Idlib province, and is supported by Turkey.

The tensions between Baku and Tehran began to escalate on August 11, when Baku invited Iran’s ambassador, Seyyed Abbas Mousavi, to the Ministry of Foreign Affairs.  The meeting concerned Iranian truck drivers who had been detained carrying cargos from Iran to Armenia and passing through the Karabakh region, along the Goris-Kapan Highway.

Azerbaijan imposed a $130 road tax on Iranian commercial trucks transporting goods and fuel to neighboring Armenia. Azerbaijan had regained control of the highway last year during six weeks of intense fighting with Armenia.

Throughout the conflict in 2020, Iran had urged both Armenia and Azerbaijan to find a negotiated solution, but made it clear that “the territory of Nagorno-Karabakh belongs to Azerbaijan.”  However, biased media coverage falsely reported that Iran is on the side of Armenia, which political analyst Eldar Mamedov disputes.  Iran has an Armenian community of up to 300,000 individuals.

In 2016, Israeli Prime Minister Netanyahu signed an arms sale agreement with Azerbaijan, while it was certain that the Israeli drones would be targeting Armenia.  The Muslim country of Azerbaijan is one of the closest allies of Israel, having recognized the Jewish State early on, and is a major gas and oil provider for Israel. Tel Aviv and Baku have signed an agreement whereby Israeli jets can use Azerbaijani airports in an attack against Iranian nuclear installations in the event of a war. Israel provided Azerbaijan with some $825 million in weapons between 2006 and 2019, and Iran has criticized the sales and relationship. Netanyahu’s visit to Baku in 2016 and the Azerbaijani finance minister’s speech to the American-Israeli Public Affairs Council conference in 2020 are proof of the close ties between the two countries, which spans defense, energy, and security sectors.

Brenda Shaffer is an energy specialist with the Foundation for the Defense of Democracies (FDD), which is a registered lobbying institution based in Washington, DC. and part of the Israel lobby. Shaffer speaks neither Azeri Turkish nor Persian, has never conducted any field research in Iran, and her career was heavily funded by Azerbaijan’s state oil company.

Shaffer has been promoting ethnic strife in Iran, based on the fact that Iran is made up of numerous non-Persian peoples, and up to a quarter of the total population are ethnic Azeris, amounting to about 15 million. The Azeris, are cultural and linguistic kin with the Turks. Aliyev and Turkish President Recep Tayyip Erdoğan are often heard saying that Azerbaijan and Turkey constitute “one nation in two states.”

Shaffer also points out that Iran is home to about 300,000 Armenians. By pitting different ethnic groups against each other inside Iran, Shaffer and her Israeli supporters, hope to foment ethnic divisions which would destabilize Iran.

Shaffer and the FDD are behind the false media narrative that Iran sides with Armenia on the Nagorno-Karabakh conflict.

Iran’s relations with Azerbaijan steadily improved under the presidency of Hassan Rouhani, who exchanged multiple visits with his Azerbaijani counterpart Ilham Aliyev. However, the recent tensions highlight the differences between them and the various allies of Azerbaijan who are antagonists of Iran.

Turkey and Israel are on the same side of the conflict in Artsakh, and are Azerbaijan’s closest military partners, with Israeli military equipment still being delivered via Turkish and Georgian airspace to reach its destination in Azerbaijan. The trio of Turkey, Israel, and Azerbaijan are being used by the Israeli lobby in the US to put further pressure on Iran and to isolate them from their neighbors.