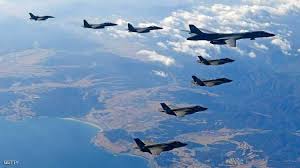 According to the US Air Force, on October 4, 2021, the last flight tests of F-35A fighters as a carrier of thermonuclear aviation bombs B61-12. Two fighters took part in the tests, each of which dropped one B61-12 model. The tests were carried out at the Tonopah test site in Nevada.

The fifth-generation fighter jets took off from the Nellis Air Force Base (LSV) near Las Vegas and flew northwest towards the Tonopah test range, where they released two B61-12 JTAs from operationally practical flight envelopes.

“The B61 series weapons are tactical gravity nuclear weapons that can be used on Dual Capable Aircraft like the F-15E and F-16C/D,” said Lieutenant Colonel Daniel Jackson, division chief, headquarters ACC strategic deterrence and nuclear integration.

Biden nuclear tests US_ARMY USA Washington
Previous ArticleAny way you slice it, Canada is one of the worst emitters on the planet.
Next Article US Trucks Loaded with Weapons Enter Al-Hasakah Countryside.