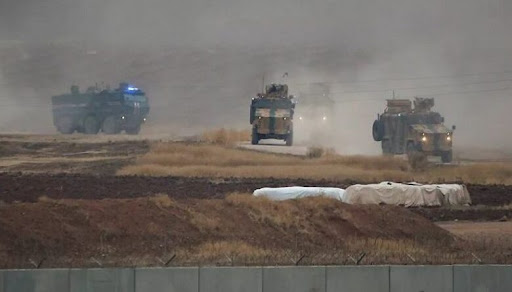 Turkish regime brought in a new convoy that includes dozens of vehicles loaded with weapons, ammunition and logistical materials to support the terrorist organizations affiliated with it in the city of Idleb and some areas in its countryside.

Local sources told SANA that the Turkish occupation forces brought in two batches of vehicles including 31 trucks and military vehicles loaded with logistical equipment, ammunition, weapons and cement blocks, through Kafr Lusin village, adjacent to the Turkish border, to support terrorist mercenaries linked to them in Idleb city and several areas in the countryside of the province.

The sources pointed out that a number of Turkish occupation’s vehicles carried out qualitative weapons, including NATO-made thermal anti-armor launchers and various anti-aircraft systems.

Last month, the Turkish occupation forces brought in dozens of tanks and troops carriers to support their mercenaries from the terrorist organizations positioning in the areas of Jabal al-Zawiya in the southern countryside of Idleb and some areas in the western countryside of Aleppo.