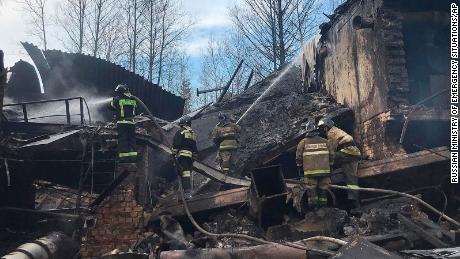 Search operations at site of explosion in Ryazan Region over — source

Search and rescue operations in the village of Lesnoi, the Ryazan Region, where an explosion took place inside a munitions disposal workshop on Friday, have been completed after the body of the last, 17th victim has been recovered from the ruins, emergency services said.

“The body of the 17th victim has been recovered from the workshop’s ruins. The search and rescue operation at the site of the explosion is over. There is nobody else under the debris,” the source said. At the moment of the emergency there were 17 workers inside. None of them survived. One was recovered alive only to die in hospital a short while later.

The fire alarm call from the village of Lesnoi was received by the Emergencies Ministry office at 08:22 Friday morning. At 09:31 it was announced that open fire had been eliminated on an area of 160 square meters. Emergency services said the fire started after an explosion, caused by a violation of the technological process in a powder production workshop. Criminal proceedings were launched. The Ryazan Region has declared October 25 a day of mourning.

explosion in Ryazan Moscow Russia
Previous ArticleRed Square blocked after partial collapse of scaffolding from Kremlin wall
Next Article The US has tricked Ukraine into believing NATO would ride to rescue in case of war with Russia. How long can it keep up the act?