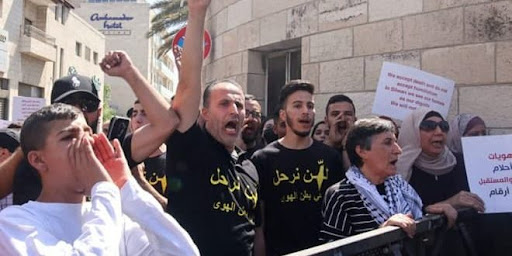 The Israeli occupation forces stormed the Swih neighborhood in the town of Silwan in al-Quds (occupied Jerusalem).

Residents of al-Quds called for a widespread solidarity stand with the residents of the Batn al-Hawa neighborhood in Silwan, in concurrence with a session in the Israeli Supreme court looking into the decision to evict 86 families from their houses in favor of settlement organizations.

The occupation has been increasing the rate of its aggressions, the latest of which was last Saturday, when large numbers of Israeli soldiers stormed the town. The Palestinians responded to these attacks with firecrackers.

For its part, the Islamic Endowments Department in al-Quds earlier a few days ago the storming of al-Aqsa by 75 settlers through the Mughrabi Gate, who carried out provocative tours in its eastern parts.

The residents of the Batn al-Hawa neighborhood in Silwan are facing the threat of eviction and displacement, after the Israeli Supreme Court allowed the Ateret Cohanim settlement organization to continue expelling 800 Palestinians, claiming that their homes were built on land owned by Jews before the Palestinian Nakba in 1948. Yet the decision comes amidst the panel of judges’ admittance that the organization’s procedures for appropriating the land were flawed, which in turn raised questions about the legality of transferring the land to the Zionist organization.

The repeated aggressions of the occupation, seen through their acts of demolition or home evacuations in an attempt to take hold of the old neighborhoods of al-Quds, showcase the extent of the Israeli insistence on Judaizing the Palestinian capital by obliterating its national and religious identities.

The town of Silwan, whose neighborhoods are threatened with eviction, is located to the south and southeast of al-Aqsa Mosque. It is considered one of the largest and oldest Palestinian towns in the area, and the closest to the mosque

Silwan is also built on a series of slopes separated by several valleys, the most important of which are Wadi Hilweh, Wadi al-Rababa, and Wadi Yasoul. Among its neighborhoods are also al-Bustan neighborhood, Ain al-Lawzeh, and Batn al-Hawa, all of which are threatened with arbitrary eviction.

Settlement encroachment on the Wadi Hilweh neighborhood, inhabited by about 6,000 al-Quds residents and located near the southern walls of Al-Aqsa Mosque, is not new. Since the 1990s, the Israeli occupation authorities have been planning to seize control of the neighborhood, due to its proximity to al-Aqsa Mosque, the al-Buraq Wall, and the Old City.

86 Palestinian families in Silwan are awaiting the final decision of the court in al-Quds regarding the appeal requests submitted by 7 families, rejecting the eviction of 100 homes in the Batn al-Hawa neighborhood, which house about 800 people.

Al-Quds israeli_OCCUPATION middle_east Palestine silwan
Previous ArticleIf EU ‘starts WW3’ against Poland by withholding promised funding, Warsaw will defend itself with ‘any weapons available’ – PM
Next Article US Officials: Iran Behind Attack on US Base in Syria