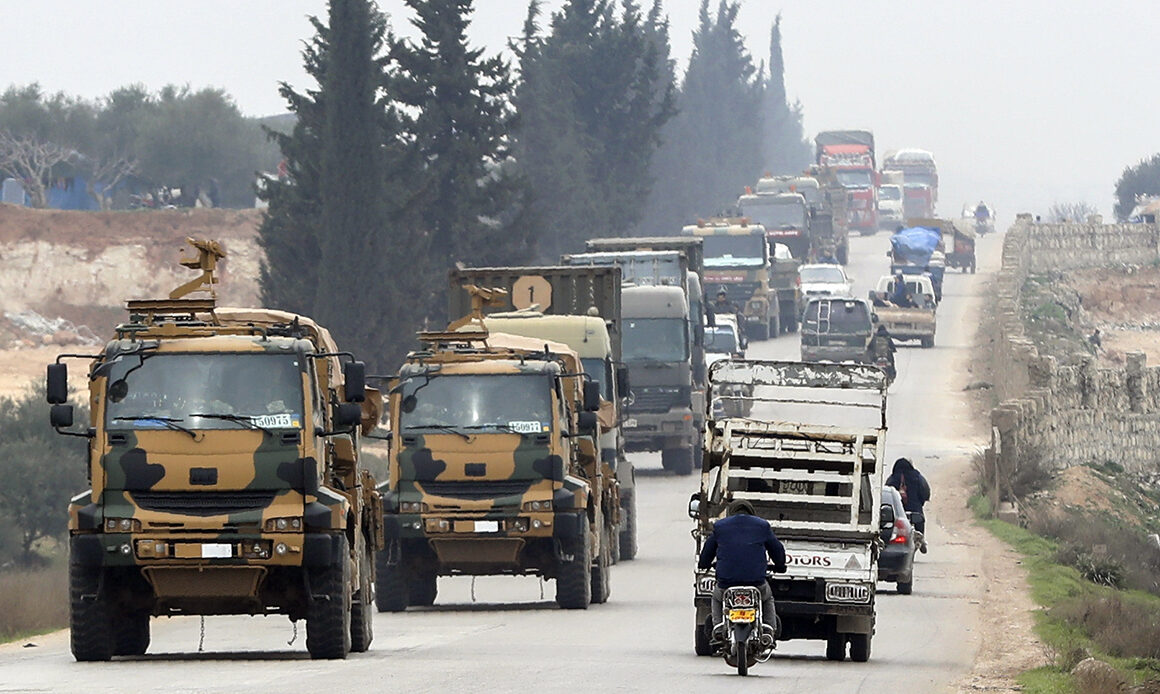 FILE - In this Friday, Feb. 28, 2020 file photo, a Turkish military convoy moves in the east of Idlib, Syria. Syria’s official news agency said Sunday, March 1, 2020, that two of its warplane were shot down by Turkish forces inside northwest Syria, amid a military escalation there that's led to growing direct clashes between Turkish and Syrian forces. SANA said the jets were targeted over the Idlib region, and that the four pilots ejected with parachutes and landed safely. (AP Photo, File)

Turkey has dispatched truckloads of military and logistical equipment to northern Syria, only a day after hundreds of Syrians staged a demonstration to denounce the presence of Turkish occupation forces in their country.

The HTS is a coalition of different factions of al-Qaeda-linked terror outfits largely composed of Jabhat Fateh al-Sham, formerly known as al-Nusra Front.

The sources added that the convoy later headed toward positions held by Turkish-backed militants in the city of Ras al-Ayn.

They noted that a large number of Turkish unmanned aerial vehicles flew overhead as military and logistical equipment were brought into Syria.

On Monday, residents of Kafr Naya town, north of Syria’s northwestern city of Aleppo, expressed strong resentment over deployment of Turkish troops and their allied Takfiri militants to their area during a large rally.

The participants waved national Syrian flags and condemned Turkish soldiers and their allies over attacks against residential buildings and civilian infrastructure.

They urged respect for Syria’s territorial integrity, stressing the need to confront attempts aimed at occupation and disintegration of Syrian territories.

The demonstrators said they were confident about Syrian government forces’ determination to stand up to any act of aggression and their heroism to liberate every inch of the occupied Syrian soil.

Turkey has deployed forces in Syria in violation of the Arab country’s territorial integrity.

Ankara-backed militants were deployed to northeastern Syria in October 2019 after Turkish military forces launched a long-threatened cross-border invasion in a declared attempt to push fighters of the Kurdish People’s Protection Units (YPG) away from border areas.

Turkey has played a major role in supporting terrorists in Syria ever since a major foreign-backed insurgency overtook the country more than ten years ago.

Syrian President Bashar al-Assad and other senior officials have said the Damascus government will respond through all legitimate means available to the ongoing ground offensive by Turkish forces and allied Takfiri militants in the northern part of the war-battered Arab country.