Home Politics Billions of Euros to “Innovate” the Nuclear NATO 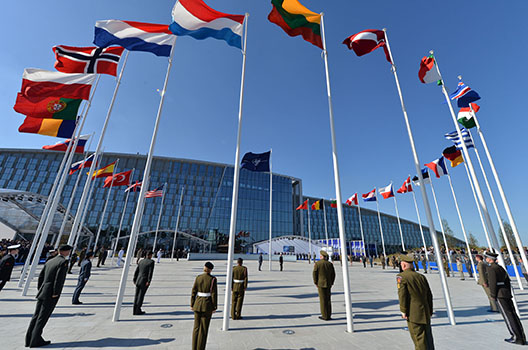 “NATO has ended up in the attic,” wrote the political commentators of several newspapers a month ago, after France had withdrawn its ambassador from Washington on September 16. It was Paris’ protest at being excluded from the strategic-military partnership between the United States, Great Britain and Australia, announced the day before, and at losing a lucrative contract for the sale of submarines to Australia, which will be replaced by nuclear submarines supplied by the U.S. and Great Britain.

A week after the resounding diplomatic break, however, the French general Lavigne was put in charge of the Allied Transformation Command, with headquarters in Norfolk in the U.S., and the presidents of the two countries, Biden and Macron, published a Joint Declaration.

Biden reaffirmed “the strategic importance of the French and European engagement in the Indo-Pacific” (the region that in Washington’s geopolitics extends from the west coast of the US to that of India). The reason was explained by the Military Committee of the Chiefs of Defence of the 30 NATO countries, meeting in Athens: “While Moscow’s aggressive actions are a threat to our security, China’s rise is fundamentally shifting the balance of power, which has potential consequences for our security, our prosperity and our way of life.”

In the face of such “threats,” they concluded, “we need Europe and North America to stand strong, bound together”. Biden reiterated in his joint statement with Macron: “The United States recognizes the importance of a stronger, more capable European Defence Force that is complementary to NATO”. Therefore, a militarily stronger Europe, but as a complement to NATO: an asymmetrical alliance, to which 21 of the 27 countries of the European Union belong, in which the position of Supreme Allied Commander in Europe is always held by a general of the United States, which holds all the other key commands in Europe (such as the JFC-Naples with headquarters in Lago Patria).

On this background, the meeting of 30 Defense Ministers (for Italy Lorenzo Guerini, Democratic Party) was held on October 21-22 at the NATO headquarters in Brussels. It created an “Innovation Fund” with an initial allocation of 1 billion euros, to be paid by 17 European countries including Italy, but not by the United States, for the development of the most advanced technologies for war use. It launched the “Strategy for Artificial Intelligence”, an even more costly program for NATO to maintain its advantage in this field that “is changing the global defense environment”, i.e. the way war is waged. It decided on “improving the readiness and effectiveness of our nuclear deterrent,” i.e., deploying new nuclear weapons in Europe, of course with the motivation of defending against “the growing missile threat from Russia.”

On the eve of the NATO meeting, the Russian Defense Minister, Sergei Shoigu, warned that “the United States of America has stepped up work with the full support of its NATO allies to modernize tactical nuclear weapons and their storage sites in Europe” and Russia considers particularly worrying “the engagement of pilots from the bloc’s non-nuclear member states in the drills to practice employing tactical nuclear weapons.”A message directed in particular to Italy, where the U.S. is preparing to replace B61 nuclear bombs with the new B61-12s and Italian pilots are being trained in their use with F-35s. “We regard this as a direct violation of the Treaty on the Non-Proliferation of Nuclear Weapons,” Russia’s defense chief stressed.

The message is directed to Italy and other European NATO members who, despite having ratified the Non-Proliferation Treaty as non-nuclear countries, host US nuclear weapons and train for their use. The implicit meaning of the message is clear: Russia considers these countries a source of threat and is taking countermeasures. The message has been ignored as usual by our government and parliament and, of course, by the media that have put NATO in the attic.