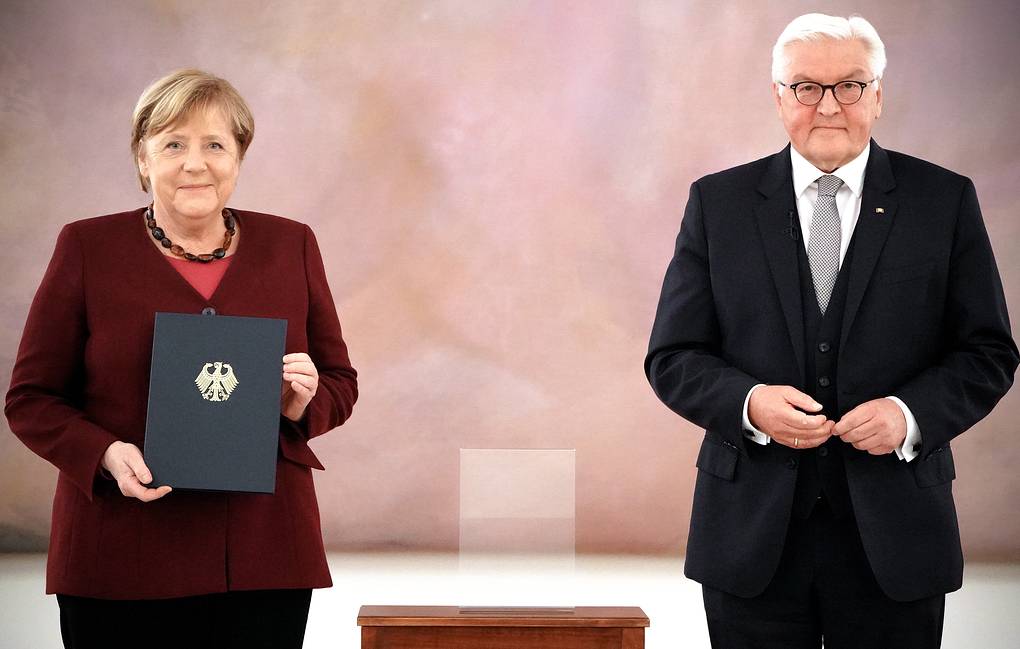 epa09547194 German Chancellor Angela Merkel (L) receives the certificate of discharge by German President Frank-Walter Steinmeier (R), at the Bellevue Palace in Berlin, Germany, 26 October 2021. Following the 26 September 2021 elections, German Chancellor Angela Merkel and ministers of the government cabinet received their certificates of discharge but will continue to hold their offices on an acting basis until a new government is finally formed. EPA-EFE/CLEMENS BILAN

German President Frank-Walter Steinmeier presented Chancellor Angela Merkel and members of her cabinet with official resignation papers; the outgoing Chancellor and her cabinet will continue to act as interim government until the new cabinet is established. The presentation ceremony was aired by NTV.

“A lot happened during the last four years. To say that the previous legislative period was difficult, considering the tasks that had to be solved, does not nearly reflect the real state of affairs,” the German President noted.

According to Steinmeier, “the pandemic turned the world upside down.”

“It took huge efforts from you, from the entire country,” the President said, adding that the last few years were characterized by international tensions – the complicated Brexit and the previous US administration, “that had little concerns or none at all about the international order and the trans-Atlantic partnership.”

“Europe’s internal unity remains unstable; reducing tensions, finding the balance of interests in Europe will remain one of the central goals of any new government,” the President believes.

He noted that, in the last four years, Merkel’s cabinet adopted about 600 laws.