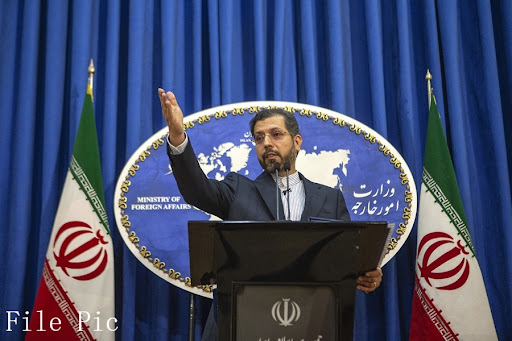 Iran says the US Treasury Department’s latest move to impose a fresh round of sanctions on Iranian natural and legal persons contradicts Washington’s claim of seeking to return to the nuclear deal of 2015 and proves the White House is by no means reliable.

“The imposition of new sanctions exposes the quite contradictory behavior of the White House,” Iranian Foreign Ministry Spokesman Saeed Khatibzadeh said on Friday. He added that an administration that speaks about its intention to return to the JCPOA – the nuclear deal officially known as the Joint Comprehensive Plan of Action – and continues the same policy of former President Donald Trump “is sending the message that is not trustworthy at all.”

The Iranian official noted that different US administrations have proved they have no discerning eye for realities in Iran. “Such US measures are in continuation of the Trump administration’s failed ‘maximum pressure’ policy and the country’s unlawful and cruel sanctions,” which would bring Washington “nothing but new failures” as in the past.

“These pressures and sanctions will fail to undermine the Islamic Republic of Iran’s determination to defend security and peace of the noble Iranian people. Tehran will continue the path of sustainable economic development with strength.”

On Friday, the US Treasury Department imposed a fresh round of sanctions on four individuals and two entities allegedly involved in promoting the Unmanned Aerial Vehicle (UAV) programs of Iran’s Islamic Revolution Guards Corps (IRGC) and its Quds Force, despite Washington’s claims to be serious in rejoining the nuclear deal and removing sanctions against the country.

The Treasury’s Office of Foreign Assets Control (OFAC) announced it had designated members of a network of companies and individuals that have provided “critical support” to the drone programs. The Treasury claimed the IRGC had supplied lethal UAVs to resistance movements in Lebanon, Palestine, Iraq and Yemen, which have been allegedly used in “attacks on international shipping and on US forces.” It claimed that the listed sanctions are part of Washington’s ongoing counterterrorism policy, which targets “weapons of mass destruction proliferators and their supporters.”

OFAC also imposed sanctions on Saeed Aqajani, the commander of the IRGC’s Aerospace Force (IRGC ASF) UAV Command, over an alleged role in an attack on the commercial shipping vessel Mercer Street off the coast of Oman on July 29, which resulted in the death of two crewmen. It claimed Aqajani was also behind a drone attack against a Saudi oil refinery in 2019. Iran has denied the accusations as baseless.

Also named to the sanctions blacklist were two companies the Treasury claims have provided components for and helped develop the IRGC’s armed UAVs.

OFAC also accused two individuals of having helped procure parts from companies based outside of Iran.

“As a result of today’s designations, all property and interests in property subject to US jurisdiction of the persons designated are blocked, and US persons are generally prohibited from engaging in transactions with the designated persons or their blocked property.”

“In addition, foreign financial institutions that knowingly facilitate significant transactions for, or persons that provide material or certain other support to, the persons designated today risk exposure to sanctions that could sever their access to the US financial system or block their property or interests in property under US jurisdiction.”

Iran has repeatedly rejected similar allegations, insisting its advances in the military and defensive sectors are not meant for aggressive purposes and only serve as a deterrent.

The Joe Biden administration’s sanctions came as Iran’s top nuclear negotiator Ali Baqeri-Kani said on Wednesday that Tehran will rejoin the negotiations aimed at the removal of the United States’ sanctions against Tehran before the end of November. “We agree to start negotiations before the end of November. Exact date would be announced in the course of the next week,” he tweeted after a meeting with European Union Deputy Foreign Policy Chief Enrique Morain in Brussels.

The United States re-introduced the sanctions against Iran in 2018, after leaving the JCPOA, a historic nuclear agreement that had lifted the inhumane economic bans in return for some voluntary restrictions on Iran’s nuclear energy program.