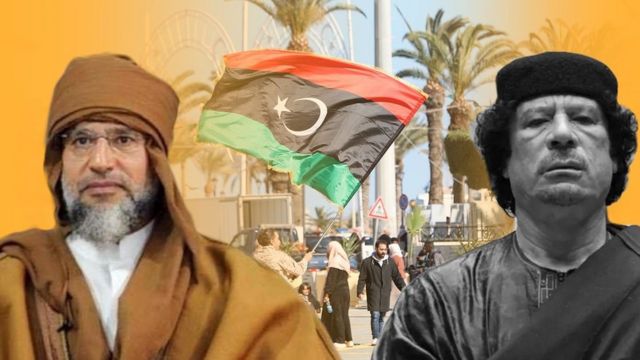 Saif al-Islam Gaddafi will run for president of Libya in the country’s first direct presidential election set to be held starting on December 24.  He is the son of Libya’s late leader Muammar al-Gaddafi who was murdered on October 20, 2011.

Gaddafi wore traditional garments as he addressed the camera and recited a verse from the Koran while announcing his bid to lead the country out of chaos and war.  The UN-sponsored plan has called for both presidential and parliamentary elections to be held simultaneously.

Gaddafi was captured by a militia after his father’s murder and was held for six years, receiving a death sentence that was later overturned.

Also running for the top seat is the military commander Khalifa Hafter, who has led a secular army fighting the Radical Islamic terrorists who are in control of the western headquarters at Tripoli.  The UN-backed government in Tripoli was stacked with members of the Muslim Brotherhood. Other candidates in the running are Prime Minister Abdulhamid al-Dbeibah and parliament speaker Aguila Saleh.

Gaddafi has gradually re-emerged onto the public stage despite being still wanted on war crimes charges by the International Criminal Court.

Since Muammar Gaddafi died, Libya has been a country in war and filled with terrorists, who disguise themselves sometimes in suits and ties and pretend to be leaders. Violent intervention in Libya was not chiefly about the security of the people: it was about the security of global banking, money, and oil.

Macron asks for foreign troops to leave during Paris meeting

On Friday French President Emmanuel Macron hosted a meeting in Paris which brought together the leaders of France, Libya, Germany, Italy, and Egypt, as well as the US vice president, Kamala Harris.  Both Turkey and Russia sent lower-level representatives to the meeting which sought to unify support for the December election in Libya, as well as call for the departure of foreign fighters.

Leaders in Paris decided “that individuals or entities, inside or outside of Libya, who might attempt to obstruct, undermine, manipulate or falsify the electoral process and the political transition” could face sanctions.

UN Secretary-General Antonio Guterres in a video message to the meeting warned of outside influence.

Turkey has rebuffed Macron’s call on foreign powers to remove their forces from Libya, and responded with a statement, “We are there as a force of stability and help to the Libyan people. And our priority as far as security is concerned is to help the Libyans establish their united Libyan National Army.”

While Turkey is bolstering the Muslim Brotherhood power base in Tripoli, the Russians have supported Haftar’s secular forces in the east, and France has faced accusations of backing Haftar, but publically claims to be neutral.

Libya is currently led by an interim government but remains politically unstable, while the civil war has Libyan militias as well as foreign-backed militias fighting in the fourth largest country in Africa, with the largest city and capital, Tripoli, located in western Libya and contains over three million of Libya’s seven million people.

US and NATO claimed to intervene in Libya for humanitarian reasons, under “the responsibility to protect”.

In November 2001, General Wesley Clark, author of “Winning Modern Wars”, was at the Pentagon and was told, “There was a total of seven countries beginning with Iraq, then Syria, Lebanon, Libya, Iran, Somalia, and Sudan.” A senior military officer explained the five-year plan then being discussed. The Project for a New American Century (PNAC) had a “hit list” of Arab nations. The common feature of all 7 nations on the US hit list is they had independent central banks, not part of the Bank cartel that is establishing “One World Money”. Nations whose governments own and operate their national currency system possess monetary defenses against financial warfare; therefore, the US is systematically destroying those defenses.

In 2000 Libya had achieved economic independence, with its water, food, oil, and state-owned bank. Libya had arisen under Gaddafi from one of the poorest of countries to the richest in Africa. Education and medical treatment were free, and having a home was considered a human right.

French President Nicolas Sarkozy reportedly went so far as to call Libya a “threat” to the financial security of the world. The huge threat of the 143 tons of gold held by Libya, and the economic threat poised if Libyan gold were to displace the French franc (CFA) as a prime African currency. This quantity of Libyan gold and Libyan silver as well is valued at more than $7 billion. The great fear was that Libya might lead North Africa into a high degree of economic independence with a new Pan-African currency.

In February 2011, the first protests broke out in Benghazi. From the outset, Western and foreign Special Forces were on the ground in Libya, with a massive supply of AK47 assault rifles and ammunition. What was reported by western mainstream media as a ‘popular uprising’, was a well-planned and orchestrated US-NATO attack on Libya for ‘regime change’, and stealing the countries resources. Al Qaeda terrorists were embedded with the US-backed opposition.

On March 19, 2011, at a meeting of the ‘rebel council,’ they announced the creation of a new oil company, the designation of the Central Bank of Benghazi as a monetary authority competent in monetary policies in Libya, and the appointment of a Governor to the Central Bank of Libya, with a temporary headquarters in Benghazi. The rebels in Libya announced they were creating a new bank, a central bank, replacing the previous state-owned Libyan bank. The rebels took a break from slaughtering unarmed civilians across Libya, to announce a new banking system, which was in line with western aims. The new Central Bank of Benghazi was established to stop any ideas of a gold currency for Africa. Economic analysts were astounded that Al Qaeda terrorists could also be astute banking specialists, capable of establishing a whole new banking authority for an oil-rich nation. The ‘revolution’ was just in the beginning stages, and yet a new bank was the first order of business. This made it obvious that it was the new bank that was of primary importance, not securing the humanitarian concerns of the residents of Libya.

On March 27, 2011, the US Secretary of State, Hillary Clinton, was briefed on clear evidence of war crimes on the part of US-NATO-backed rebels.

In 2008, while giving a speech at an Arab League Summit in Damascus, Syria, Qaddafi predicted that America will kill more Arab leaders, as they had done with Saddam Hussein of Iraq.

In 2009, while Qaddafi was acting head of the African Union, he planned to create a gold-backed African currency to compete with the dollar and euro. Oil and all resources in Africa would be traded in Gold.

Qaddafi’s plan would have strengthened the whole continent of Africa in the eyes of economists backing sound money, but it would have been especially devastating for the US economy, the American dollar, and particularly the elite in charge of the system.

The plan was designed to establish an alternative to the French African franc (CFA) in the French-speaking African nations. Libya’s gold reached an all-time high of 143.82 Tons in the second quarter of 2000 and a record low of 116.64 Tons in the fourth quarter of 2011, as reported by the World Gold Council.

There was a huge amount of Libyan gold missing at the end of 2011 after Gaddafi was murdered, and when the US-NATO invasion forces were in control of the country.

The refugee boats to Europe

UNHCR, the UN Refugee Agency, has urged the Libyan government to immediately address the dire situation of asylum-seekers and refugees.

Vincent Cochetel, UNHCR’s Special Envoy for the Western and Central Mediterranean Situation, said “The Libyan authorities must come up with a proper plan that respects their rights and identifies durable solutions.”

About 3,000 people are currently sheltering outside the Community Day Centre (CDC) in Tripoli, where UNHCR and its partners have been providing medical assistance and other services, while the UNHCR continues to call on the authorities to respect the human rights and dignity of asylum-seekers and refugees, stop their arbitrary arrest and release them from detention.

Libyan migrants are risking their lives almost daily to cross the Mediterranean Sea to arrive on Europe’s shores.  The election next month may bring security and peace to Libya and give residents a chance to rebuild their lives at home, instead of taking a boat ride to the depths of the sea.