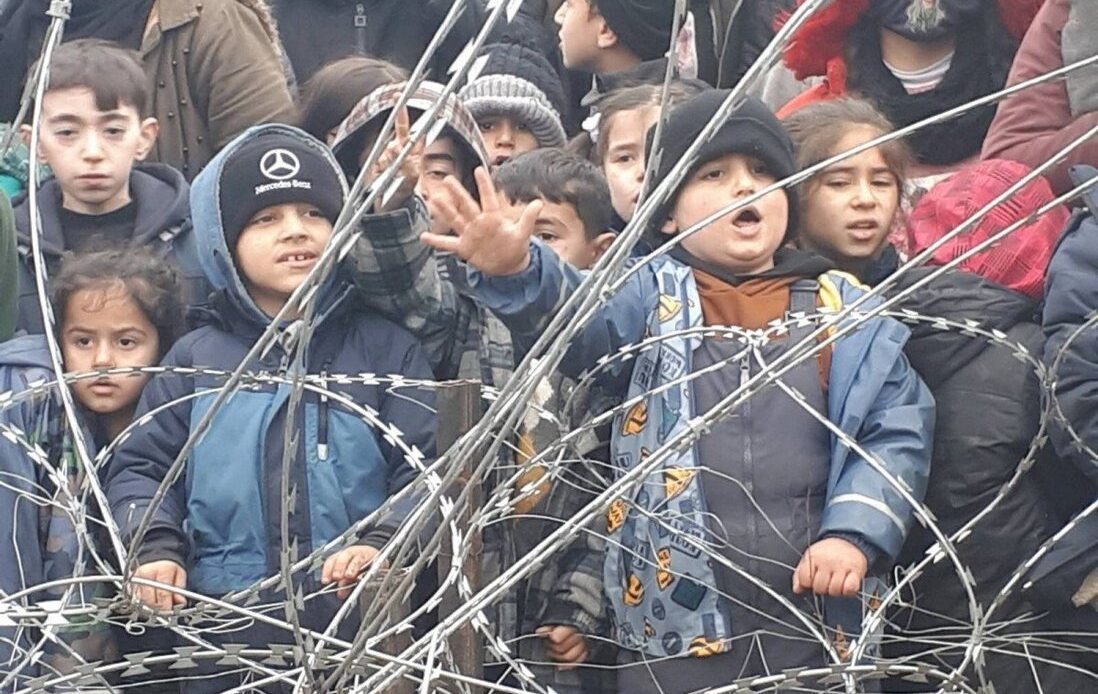 Hundreds of migrants are roaming the forests along the huge border between Belarus and Poland as they attempt to make their way into the EU.

European Commission President Ursula von der Leyen stated on Twitter last Wednesday that the rising tensions on the Belarus-Poland border were not a “migration crisis” but a “hybrid attack,” a form of irregular warfare that blends military and non-military methods.

Most of the refugees attempting to cross the Belarusian-Polish border are from Iraq, but nationals from Syria, Africa, and Afghanistan are also among those making the journey to Minsk.

Irbil, in Iraq’s Kurdish region, is one of the main departure points. A German Foreign Ministry spokesman said in October that there was also a noticeable increase in direct flights to Minsk from Beirut, Damascus, and Amman.

Belarus’s leader, Alexander Lukashenko is playing a political game, using the migrants as pawns, in retaliation for EU sanctions against his administration, and weaponizing people’s dreams of a better life.

In the EU’s response to the border situation, the guiding principles of the 1951 Refugee Convention have been sidelined by the bigger democracies as right-wing, and the anti-migrant sentiment is widely entrenched across the continent. Trapped between heavily armed Polish and Belarusian border guards, in freezing conditions and with meager food supplies, the migrants faced a perilous situation, and at least 11 people died.

Poland, an EU member state, forced people back over the border and fired tear gas and water cannons at them. It also barred journalists, aid workers, and international observers from the border zone; however, Poland came under no pressure from the EU to open its border, and had the bloc’s full support.

Belarus has been weaponizing migration into three EU member states—Latvia, Lithuania, and Poland—since June, by luring migrants from Africa and the Middle East to Belarus, offering them unfettered passage to the EU border, often by government bus, and at times even forcing them at gunpoint to cross into the EU.

Germany remains the top destination for people seeking work in Europe, with the number of asylum applications filed in the country already exceeding the 100,000 mark in 2021. Three German states border Poland, and 34,300 attempts to illegally enter have been recorded from late summer to October. Germany’s Federal Office for Migration and Refugees (BAMF) said that initial applications from asylum-seekers are 35.2% more than in the same period last year.

US-NATO attack on Iraq and Syria

The cause of the Syrian migration is the US-NATO attack on Syria for ‘regime change’ which was started in 2011 by President Obama and utilized terrorists following Radical Islam.  The cause of the Iraqi migration is the US and allied attack on Iraq in 2003 ordered by Bush, which devastated the country and caused Al Qaeda to be established in Iraq, and Al Qaeda remains in control of Idlib in Syria while being protected by Turkey, which is led by a Muslim Brotherhood regime.

Turkey, a NATO member state, is complicit in the Belarus border crisis with Turkish Airlines being one of the carriers and Turkey being one of the main points of origin for flights landing in Minsk.

Turkey’s authoritarian president Recep Tayyip Erdogan has come to the aid of fellow strongman Lukashenko when Turkey used its veto power within NATO to water down an official condemnation of Lukashenko in May following the Protasevich incident. Turkey also blocked a NATO defense plan for Poland and the Baltic states for over six months until June 2020.

The EU threatened sanctions and the next day Turkey’s Directorate General of Civil Aviation announced that Ankara would not allow citizens of Iraq, Syria, and Yemen to board Belarus flights.

Erdogan has avoided developing a long-term strategy to help or integrate refugees in Turkey. Instead, he has used them as bargaining chips with the EU and has weaponized the refugees.

On February 28, Erdogan proclaimed Turkey’s border with Europe “open” and his country’s authorities were told not to hinder any refugees from attempting to cross into the EU. Within 48 hours, nearly 13,000 refugees had arrived at the Greek-Turkish border while hundreds more landed on Greece’s neighboring islands. Turkish police simultaneously deployed to prevent any refugees from returning to Turkey. The situation forced Greece to deploy its military and request additional assistance from Frontex, the EU’s border police.

Erdogan had opened his country’s border to gain tactical leverage over Europe in negotiations for more aid to compensate for the failure of his Idlib occupation and the influx of refugees it might bring.  As Turkey increasingly turned a blind eye to large numbers of refugees crossing illegally into the EU, it simultaneously negotiated several deals with Europe to finally start policing its borders and stem the migrant flow. In what became known as the 2016 EU-Turkey migrant deal: Six billion euros in return for Turkey stopping the nearly three million Syrian refugees on its soil leaving for Greece; however, the people who arrive in Greece, and meant to be sent back to Turkey, are instead languishing for years in overcrowded camps on Greek islands. Though the funding for the agreement expired in 2019 and Turkey continues to threaten to flood Europe with refugees to blackmail the EU.

Western European leaders have blamed Russia, while President Putin has insisted that Russia has “absolutely nothing to do with” the ongoing crisis on the Poland-Belarus border.  It appears that Russia’s image is being harmed, and without benefit, which is to the liking of Western leaders.

Lukashenko devised this hybrid attack in retaliation for a range of EU economic and financial sanctions imposed in June over what Brussels referred to as Lukashenko’s “serious human rights violations.” The EU imposed these sanctions after a Belarusian jet in May forced down a commercial plane to arrest Roman Protasevich, a dissident journalist on board.

The Baltic States and Poland are taking in refugees from the Belarusian opposition against Lukashenko, who has been called the last dictator in Europe.

Migrants have been lured into traveling to Belarus under false promises. The Belarusian Embassy in Irbil handles visas, while a report by the Belarusian media outlet KYKY.org wrote that 12 travel agencies in Belarus have been given “tacit” approval to organize visas for foreigners.

VIP Grub, a passport and visa service in Istanbul has advertised:  “European airlines only, need 1.2 million refugees. Seize the opportunity. Pay us after arrival,” and this implicates Turkish Airlines in the scheme. The Belarusian Belavia Airlines also has direct flights to Minsk from Istanbul, and Dubai, as migrants have reached the Belarus territory by tours announced from travel agencies in Belarus which have been selling them false hopes on entering the European Union countries.

The double standards of the EU

Poland has passed legislation in parliament allowing groups of migrants to be pushed back into Belarus which violates EU law, which states migrants who reach Poland should be allowed to apply for asylum in Poland or the EU, while ways are found to stop travel to Belarus.

For the past six years, the EU has tried to shut out migrants from poorer and conflict-ridden countries through border walls, policing, and dealing with Turkey in fear of the political effects of large-scale migration, which has given authoritarian states a road map to blackmail. The EU has failed to find a united response grounded in its founding values of tolerance and solidarity,

The problems started in 2015, when the mass arrival of more than one million people, the majority fleeing economic hardship brought on by the war in Syria. Chancellor Angela Merkel of Germany’s initial welcome soon gave way to harsh statements and newly fortified borders. Thousands of migrants perished trying to cross the Mediterranean Sea, while others were warehoused in detention centers along the EU’s fringes.

The EU has a habit of capitulating to the demands of autocrats, offering Libya’s Col. Muammar el-Gaddafi €60 million in 2010 after he threatened an “influx of starving and ignorant Africans.” The EU still funds the Libyan Coast Guard, despite reports that much of the money is funneled to a militia and human traffickers.

European officials use the language of moral superiority and humanitarianism without taking action to back it up. The law states the EU must demand Poland to allow humanitarian access to the border zone where necessary and to process asylum claims of people on its territory.

The suffering in Syria, because of EU sanctions continues and will undoubtedly lead to further migration attempts, by people who have been stripped of their jobs when the US-NATO backed terrorists destroyed hundreds of factories in Syria, and carted off the contents and machinery to Turkey, who later sold the stolen wheat stores of Syria to the EU, which was used to bake the croissants served on the Champs-Elysees.