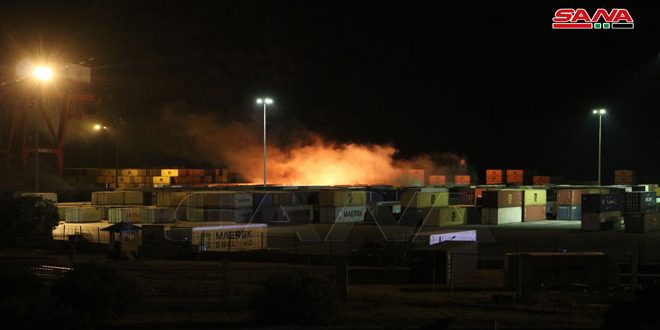 The main port of Syria at Latakia was attacked by Israeli missiles fired from the Mediterranean Sea at about 1:00 am today.  The Syrian air defenses reacted to the strike which produced five large explosions which rocked the nearby residential neighborhoods, with some residents reporting broken windows in the bitterly cold night.

Latakia’s new Governor, Amer Ismail Hilal, said from the scene, “The firefighting teams were able to put out the fire that erupted at the port containers yard after the Israeli aggression.”

Dozens of shipping containers were destroyed and damaged.  Photos from the scene show packages of coffee scattered among the debris, as evidence of commercial food, having been destroyed.  The port is used by private businesses to import medicines, food products, and supplies for Syrian residents who are suffering from devastating US-EU sanctions which prevent importing materials for rebuilding after 10 years of armed conflict.

Russia, which has been Syria’s most powerful ally during the war, operates an airbase some 20 km (12 miles) away at Hmeimim in Latakia province. Israel typically refrains from carrying out attacks against targets if there are Russian troops nearby.

Israel has staged hundreds of strikes on targets inside Syria over the years, some of which have targeted the main airport in the capital Damascus.

The food products destroyed in the attack were imported by private businesses.  These merchants are now faced with financial ruin.  Many such merchants have left the country, but the ones who have stayed have suffered greatly from the US-EU sanctions which prevent the transfer of money from Syria to pay for shipments. These merchants have provided vital supplies for the Syrian public.  The Israeli attack on the shipping containers may cause merchants to give up ordering the supplies the residents need, such as medicines and food, for fear of loss of the cargo to an attack.  Experts have said this is likely the aim and strategy of the Israel missile attack: to prevent supplies coming in, which will result in further suffering of the Syrian people, who never left their homes, but have been patiently awaiting a return to peace and stability.

What was the target?

Israel has acknowledged that it targets the bases of Iran-allied groups, such as Lebanon’s Hezbollah that has fighters deployed in Syria. It says it attacks arms shipments believed to be bound for the groups.

However, what is the evidence that Israeli or US missile attacks on Syria are strictly on military targets?  A past US missile attack on Syria destroyed a medical research lab in Damascus developing domestic chemotherapy drugs, in wake of the US-EU sanctions preventing even chemotherapy drugs from being imported.  A past Israeli attack near Latakia destroyed an agricultural warehouse.  The intelligence gathered for Israeli and US airstrikes has a history of being faulty.

Elizabeth Hoff, former director of the UN medical agency WHO in Damascus said in the past the US-EU sanctions were preventing hospitals in Syria from ordering replacement parts for medical machines, and instead, the machines sat idle gathering dust in hospitals across Syria.

While the US-EU sanctions carry a humanitarian waiver, the cost and time of obtaining the waiver prohibit all but the most dedicated western businesses from doing business with any private company.  Hospital buyers say when they call up a medical source with an order, they get a disconnect once they give the port of Latakia as the final destination.  Pharmacies used to order drugs from Lebanon, but currently, they are without medicines due to their economic and political meltdown, which included banks closing their doors.

Syria had produced their medicines and shipped products to various countries in the Arab world, but after the US-sponsored terrorists following Radical Islam gained territory in Homs and Aleppo, the pharmaceutical manufacturers were destroyed and the contents are taken to Turkey where President Erdogan established new factories from the those stolen from Syria.

Israel says Iranian presence on its northern frontier is a red line, justifying its strikes on facilities and weapons inside Syria. However, it was Iranian- backed soldiers who have fought to eradicate ISIS and Al Qaeda from Syria in coordination with the Syrian and Russian military.

On November 3, Israel launched an aerial attack with several missiles targeting an area on the outskirts of the Syrian capital of Damascus.

On November 24, Israeli missile attacks in the west of Homs province killed five people, including civilians, and wounded seven in what was the fourth Israeli attack in the month.

Israel attacked the city of Latakia in 2018, when Israeli jet-firing missiles hid behind a Russian military plane, in a maneuver called “shadowing.”  Because of this tactic, a Russian plane carrying Russian soldiers was shot down with a great loss of life, which caused a major confrontation between Israel and Russia. Israel has also carried out raids against targets in Latakia in 2014 and twice in 2013.