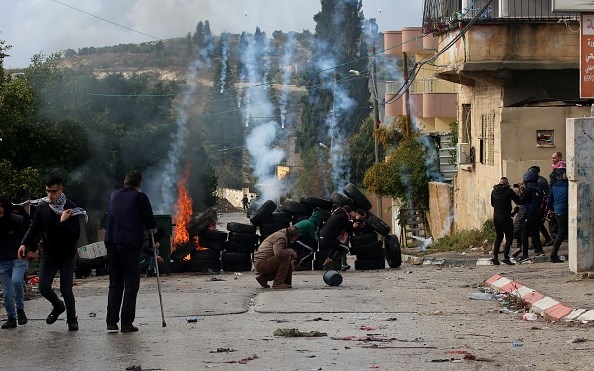 Residents of Burqa village in Nablus are standing up to the occupation forces’ attempt to set up a checkpoint at the entrance to the village, where more than 10 Palestinians were injured by tear gas and rubber bullets.

The residents of Burqa village in Nablus confronted the Israeli occupation forces’ attempt to set up a checkpoint at the entrance to the village, where more than 10 Palestinians were injured due to tear gas and rubber bullets.

In the same context, Palestinian youths confronted dozens of Israeli settlers who stormed the Joseph’s Tomb in Nablus under the protection of the occupation police. One young man was wounded by rubber bullets shot by the IOF.

In the Sheikh Jarrah neighborhood in occupied Al-Quds, the IOF are currently besieging two houses belonging to Mahmoud Salhia and his sister, demanding that the family evacuate the property.

The IOF stormed a plant nursery owned by Salhia, and forcibly vacated its belongings with the aim of confiscating the six thousand Square Meters land.

In an interview for Al Mayadeen, Salhia said this was a plot to ethnically cleanse Palestinians.

On Monday morning, the Palestinian Ministry of Health announced the martyrdom of Sheikh Suleiman Al-Hathlin, one of the icons of the popular resistance in Al-Khalil.

Sheikh Al-Hathlin, 80, sustained a serious injury at the entrance to the village of Umm Al-Khair in Masafer Yatta, south of Al-Khalil, after he was run over by an IOF vehicle on January 5th, and was admitted to Al-Mizan hospital for treatment before his martyrdom.

In one of “Israel’s” newest attempts to vandalize lands of Palestinian livelihood and sustenance, the Israeli occupation authorities in Al-Quds ordered Monday the demolition of a mosque in the Beit Safafa neighborhood built before 1948, Israeli media reported.

This comes as Israeli radio Kan reported Sunday that more than 100 Palestinians, including children, have been arrested by the Israeli occupation forces since the beginning of the demonstrations in Al-Naqab in protest of bulldozing and seizing lands.