Home Politics Middle East Raisi from Russian Duma: US at its weakest 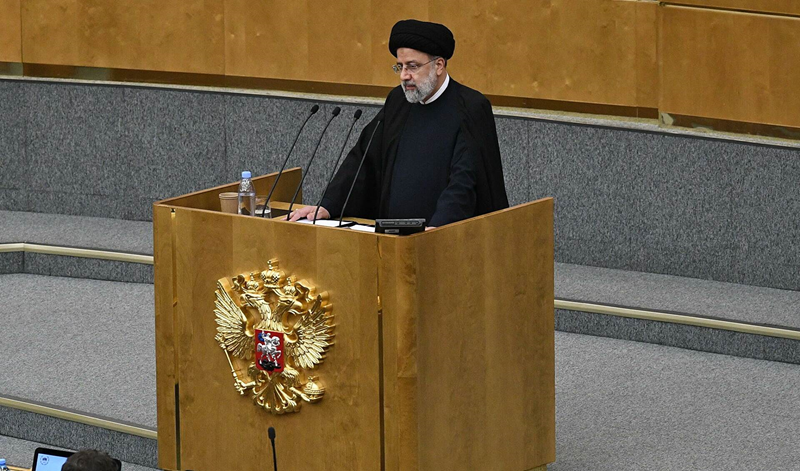 Iranian President Ebrahim Raisi speaks before the Russian Duma, and stresses that the model of cooperation between Russia and Iran in Syria bore fruit thanks to the resistance of the Syrian people, and that terrorism is a result of hegemony.

Iranian President Ebrahim Raisi said on Thursday that strengthening relations with Russia reflects Iran’s position of dealing with all countries, especially neighboring countries for the benefit of our peoples.

Raisi added, during a speech he gave to the Russian State Duma, that Iran trusts and believes in improving relations with Russia, noting that there are great prospects for this today.

Raisi: Effective steps must be taken to develop relations between Iran and Russia

The Iranian President clarified that agreements between the two countries will give a great push to their economic and trade relations, adding that Iran seeks to develop relations with Russia on firm grounds.

He went on to say that during his meeting with Putin, he noticed a lot of identical positions in both countries’ bilateral, regional, and international stances.

Raisi asserted that the model of cooperation between Russia and Iran in Syria bore fruit thanks to the resistance of the Syrian people, and said that terrorism is a result of hegemony, and the strategy of hegemony has failed.

Raisi: The United States is at its weakest

Raisi also stressed that the United States is at its weakest today, while the strength of independent states has begun to grow and develop. He also highlighted that the policy of the US is still ongoing in order to weaken countries from within through sanctions and destabilize their domestic security.

Commenting on NATO’s policies, Raisi said that the alliance is barging into other countries’ soil under the pretext of defense, but is threatening the security of these countries and their safety, and its current practices will lead to its collapse. He emphasized that independent countries must band together to fight hegemony.

According to Raisi, Iran has a rich and positive history of cooperating with independent countries, noting that his country had opened two fronts against terrorism and had to contend with economic pressure, however, Iran has great economic potential.

Iran is not after making a nuclear bomb

As for Iran’s nuclear activity, the Iranian President highlighted that the IAEA has presented more than 15 reports that show Iran’s compliance with the JCPOA, adding that Iran’s policy, in accordance with the policy of Ayatollah Khamenei, is to not build nuclear weapons because they have no place in Iran’s defense strategy.

Earlier today, the Iranian President said during a meeting with the Iranian diaspora in Russia that Moscow has a serious will to remove the obstacles and problems that hinder the strengthening of cooperation between the two countries.

Raisi to Iranian diaspora: We have launched economic reform

Iran’s President also declared that he discussed bilateral and economic relations with Russian officials, in addition to Iran and Russia’s important regional and international roles.

Raisi said that his government is working on resolving problems and obstacles facing Iranian exports, and has begun to reform the economic system, and this will be clearly seen in the budget of the Iranian new year, which will begin on March 21.

Raisi, at the beginning of the meeting, made it clear that there will be no limits to “expanding and developing relations with friendly Russia,” noting that “relations with Russia will develop into strategic ones.”

For his part, Russian President Vladimir Putin noted that “the support of Moscow and Tehran has become a decisive factor that helped Syria overcome terrorist threats on its territory,” saying “Our efforts have greatly helped the Syrian government to overcome threats associated with international terrorism.”