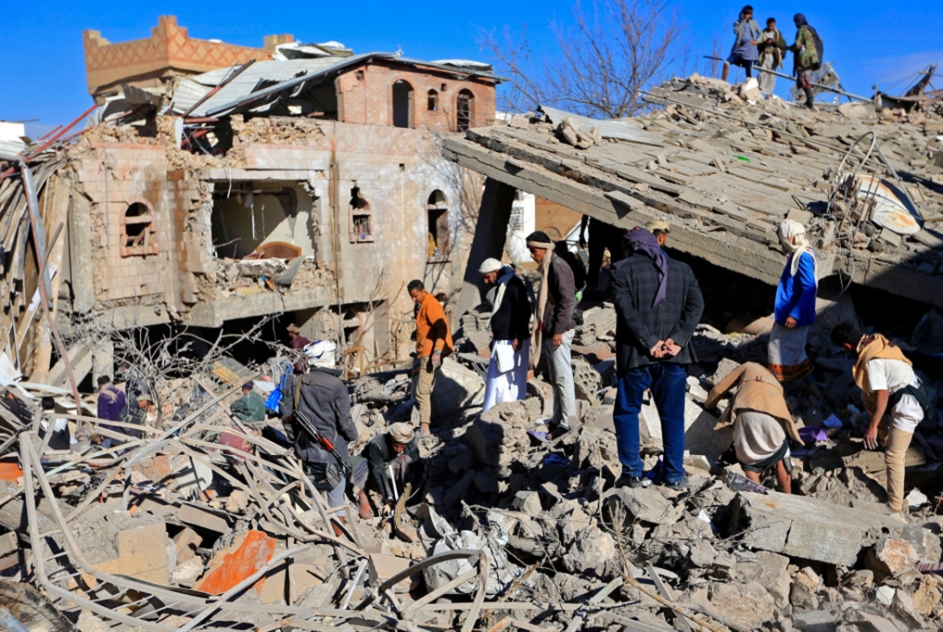 The Saudi-led coalition has carried out a massive airstrike on Sanaa, and the UAE has vowed retaliation for the drone attack on Abu Dhabi which hit fuel facilities and airport renovations, that killed three on Monday. The coalition airstrike has caused causulties amounting to more than 200 people as a result of the raging conflict.

Today at dawn, UAE and Saudi Arabia were attacked by the Houthis in reply to the Saudi-led coalition massacres against the Yemeni civilians.

In October, the UN human rights council voted to end its war crimes investigation of the conflict in Yemen, following intensive lobbying by Saudi Arabia, and this has resulted in a massive increase in the violence against the Yemeni people.  Yesterday, the International Rescue Committee called for the reinstatement of the war crimes investigations body.

The UAE participates in the Saudi-led military coalition that supports Yemen’s government against the Iran-backed Houthi rebels. For seven years, a coalition has been destroying the poorest country in the Middle East while using the most expensive and sophisticated bombs from the US and the UK.  The alliance of the US and UK with the only absolute monarchy on earth, Saudi Arabia, makes these western democracies complicit with war crimes and atrocities.

In the first deadly assault on the UAE, the Houthi rebels were sending a message to the luxurious tourist destination, and home to thousands of western ex-pats that even the ongoing Dubai 2020 exhibition is not safe.

Houthi military spokesman Yahya Saree said that they had “carried out… a successful military operation” against “important and sensitive Emirati sites and installations” using both ballistic missiles and drones.

“But it is a warning if the UAE continues its hostility to Yemen, it will not be able in the future to withstand the coming strikes.”

Condemnation for the attacks came from Saudi Arabia, Bahrain, Qatar, the US, France, and Russia.

Two weeks before the UAE attack, the rebels hijacked the UAE-flagged Rwabee and released footage of military equipment on board. Shipments of weapons are received, but medicines and food supplies are blockaded.

Western democracies turn a blind eye when it comes to the war directed by Crown Prince Mohammed bin Salman (MBS).  He orders decapitations, women locked up without charges, a Washington Post journalist hacked into pieces, and school children burned alive on their bus in Yemen, which according to Human Rights watch was an “apparent war crime”.

Campaign Against Arms Trade (CAAT) in the UK scrutinizes the UK’s involvement in the war on Yemen.  According to CAAT, the UK weapons dealer BAE systems has sold £17.6bn worth of arms and military services to Saudi Arabia since 2015, while the company has 6,700 members of staff posted there. In 2019, CAAT requested a judicial review which found that the UK government’s decision to keep licensing military equipment to Saudi Arabia was unlawful.

Yemen is suffering under a blockade that prevents, or slows, the delivery of basic foodstuffs as well as humanitarian supplies such as medicines, and there have been no efforts to lift or ease the blockade.  It would seem that the western democracies have chosen to allow Saudi Arabia and its partner, UAE, a free hand in the wholesale slaughter of civilians in Yemen.

While the UK continues to arm Saudi Arabia, the UK cut its humanitarian aid to Yemen by half in 2021, and the UN World Food Programme says lack of adequate funding means it cannot feed Yemenis as they face starvation.  In September, the UN warned of the impending starvation of millions in Yemen as the economy reached new depths of collapse.

The residents of Sanaa feel helpless and hopeless.  Shopkeepers and small business people are barely able to conduct business amid the airstrikes. The Houthi rebels had held Sanaa since 2014, but since September the coalition has increased the attacks, which have killed civilians.

The conflict has raged for almost seven years and killed more than 100,000 people while displacing 4 million.  In March 2015, the coalition began targeting Yemen after the Houthis ousted the Saudi-backed government in Sanaa.  The Houthis say they are fighting in self-defense against foreign aggression.

In 2011, Ali Abdullah Saleh was forced to hand over power to his deputy, Abdrabbuh Mansour Hadi.  Saudi Arabia backs Hadi against the Houthi rebels.  The Saudi-US led coalition began bombing Yemen in 2015.  War crimes, atrocities, and indiscriminate and disproportionate airstrikes against civilians and civilian structures have been carried out in the name of the Saudi-led coalition.

The US and Europe are mired in their domestic woes, and at the top of their lists is the economic disaster caused by the Covid-19 pandemic.  Imagine the suffering of living through a pandemic while in a war zone, especially while under a blockade that prevents Covid-19 related supplies and medicines from being docked.

There are no peace talks planned between Iran, Saudi Arabia, and the UAE.  Without a peace plan that includes the Houthi rebels, their backers, and those attacking Yemen, there can be no peaceful solution to end the suffering of 30 million people in Yemen, which has been dubbed by UNICEF as “a living hell”.