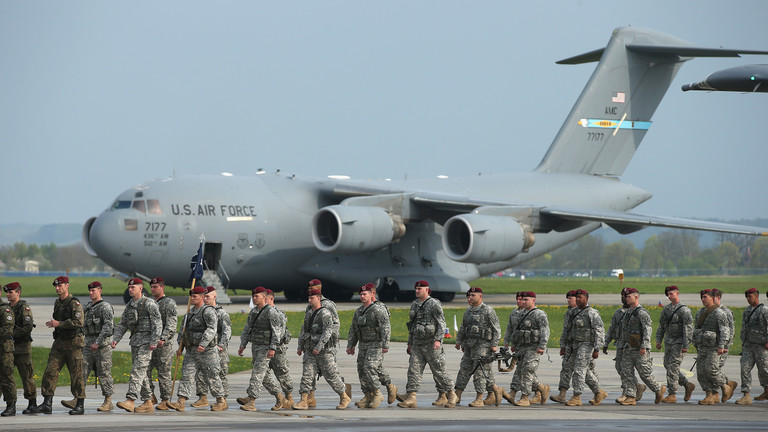 US President Joe Biden is considering deploying troops, aircraft, and warships to the Baltics and Eastern Europe as a means to deter Russia from invading Ukraine, The New York Times has reported.

Citing anonymous sources, the newspaper claims the White House is currently mulling over plans to deploy between 1,000 and 5,000 troops, with the potential to increase this number tenfold if the situation deteriorates. The options were reportedly presented to the president by the US Department of Defense on Saturday, at a meeting at Camp David, and it is alleged that Biden could make a decision this week.

Plans for a possible American deployment to Europe come as Russia is accused of massing more than 100,000 troops on the border with Ukraine, with some believing a military incursion is around the corner. The Kremlin has repeatedly denied suggestions it plans to invade, staying that it has the right to move military on its own land as it sees fit.

There was no mention of American troops being deployed to Ukraine itself.

Western nations, including the US, have warned Moscow of dire consequences in the event of an invasion of Ukraine, including severe economic sanctions that could cripple the Russian economy. Last Wednesday, the US president admitted that there are differences in opinion over the best way to punish the Kremlin but promised that the US-led NATO bloc would “impose severe costs on Russia and the Russian economy.”

“It’s not like they have all these wonderful choices out there,” Biden said. “This is not all just a cakewalk for Russia. Militarily, they have overwhelming superiority relative to Ukraine, but they’ll pay a severe price.”

“Russia has never hatched, is not hatching, and will never hatch any plans to attack anyone,” he said. “Russia is a peaceful country, which is interested in good relations with its neighbors.”