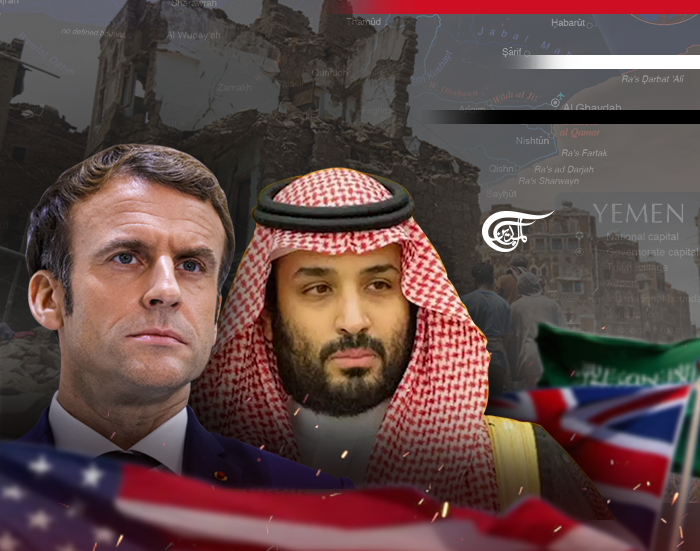 How the Saudi coalition’s crimes began with weapons from allied nations and why they are determined to remain silent.

As it turns out, the real-life monsters behind the Saudi-led coalition war on Yemen and the massacre of its people are the same champions and cheerleaders of human rights around the world oozing with hypocrisy and double standards. UNICEF has called the situation in Yemen the world’s worst humanitarian crisis, and the UK, France, Canada, and the US are among the countries responsible for making that nightmare a reality.

The US Department of State reports that human rights abuses of Saudi Arabia include, but are not limited to, “unlawful killings, executions for nonviolent offenses, torture, and cases of cruel, inhuman, or degrading treatment of prisoners, serious restrictions on free expression, the press, and the internet, severe restrictions of religious freedom,” and many many more. As of 2020, Saudi Arabia remains the world’s largest arms importer. Arms sales from the US alone amounted to $3 billion from 2015-2020, agreeing to sell $64.1 billion worth of weapons to Riyadh.

In what universe does that sound like a government worth funding with weapons? Why then do we not hear the same cries of human rights resounding in the West? Because the west and its previous administrations have long ago sold their soul to the Saudi regime before any of their current administrations can even remember.

US President Joe Biden made foreign policy commitments to end the selling of “offensive” weapons to the kingdom and “end all support” for a war that created a humanitarian catastrophe.

How did Biden deliver? A major arms sale two months ago, including 280 air-to-air missiles valued at $650 million.

At the time, the Pentagon’s statement said the sale would help to “improve the security of a friendly country that continues to be an important force for political and economic progress in the Middle East.”

Does the US consider economic progress to be the complete destruction and demolishment of a country along with 3,825 murdered children?

The former administration under Donald Trump shamelessly embraced arms sales to Saudi Arabia that in no doubt helped prolong the war that has killed thousands in what is considered the Arab region’s poorest nation, further destabilizing the already volatile region.

Unlike Biden, Trump was very public about the economic and diplomatic benefits that would follow the sale, with no regard to the thousands being killed and maimed as a result of the US-designed and manufactured weapons.

Entesaf Organization for Women and Child Rights in Yemen reported the data, adding that more than 400,000 Yemeni children are suffering from severe malnutrition, 80,000 of whom are at risk of facing death. The number of displaced families as of November has reached 670, 343 in 15 governorates.  Where exactly does Saudi Arabia intend to implement its economic progress in Yemen to allow those families to prosper?

Britain has been under increased scrutiny over its arms deals to Saudi Arabia and remains silent on the crimes it repeatedly commits.

The mind-boggling hypocrisy of the west almost has no end. The frenzy that surrounds the defense of Saudi Arabia by its allies can be mirrored with the hysteric defense of “Israel” while it commits its crimes against the Palestinians on a regular basis.

In numerous TV interviews, British and American officials can be shown echoing the same formula we have heard countless times in the last twenty years. Begin with a dictator or lack thereof, blame the people for overthrowing said dictator or supporting him, blame Iran for “emboldening” and training militias, and bam! Claim your get-out-of-jail-free card in international law.

Other Saudi allies have had their fair share of arms deals that enabled Saudi aggression.

Canada for instance has long been an arms exporter to Saudi Arabia. In 2020, Canada sent close to $2.9 billion of arms hardware to Saudi Arabia. The exports included light-armored vehicles, 31 large-caliber artillery systems, and 152 heavy machine guns

Justin Trudeau, a man who has repeatedly come out and condemned and apologized about residential schools, remains silent regarding the Yemeni children whose schools have been rendered to piles of dust.

France and the UAE: A match made in hell

In December 2021, France signed a deal with the UAE worth $19.20 billion to supply 80 Rafale fighter planes by Dassault Aviation, the largest single purchase of the Dassault-made Rafale outside of the French Army. Human Rights Watch criticized the sale, saying the UAE has played “a prominent role” in the atrocity-ridden war on Yemen. The statement also said that Riyadh was in 2020 the largest buyer of French weapons.

In a report titled “Arms sales: France and the United Arab Emirates, partners in the crimes committed in Yemen,” numerous organizations list how France failed to respect its human rights commitments according to the UN Arms Trade Treaty which “regulates the international trade in conventional arms.” The report details that the UAE is a strategic ally of France and describes the former as a “repressive dictatorship”, where all dissenting voices risk imprisonment or torture, recalling the unjust sentences issued against 69 human rights activists in 2013 after an unfair trial.

The investigative French website Disclose revealed that France delivered tens of thousands of arms to Saudi Arabia, the UAE, and Qatar during President Francois Hollande’s reign in 2016, despite knowing that they would be used in the war on Yemen.

The website quoted “secret defense documents” that “since 2016, France has allowed the delivery of about 150,000 shells” to its two Gulf allies.

The French President met with Mohammed Bin Salman as one of the first western leaders to visit the kingdom since the murder of the Saudi journalist Jamal Khashoggi in 2018.

The hypocrisy with France, in particular, is that it prides itself in its secular mantra, and its policies have mostly targeted Muslims and adopted highly anti-Islamic rhetoric. Macron’s cozying up to MBS tells a different story, with the Secretary-General of Amnesty International commenting on the move by suggesting that it is part of a “rehabilitation” policy of the Saudi Prince. She expressed, “It grieves me that it is France, a country of human rights, which is used as the tool of this policy.”

Typhoons of misery for Yemen

Over half of Saudi’s combat aircraft deployed in bombing operations in Yemen are provided by none other than the UK.

The United Kingdom signed off on arms exports worth nearly $1.9 billion to Saudi Arabia between July and September 2020 following the lifting of a ban on weapons sales to the Gulf country. “UK-made weapons have played a devastating role in the Saudi-led attacks on Yemen, and the humanitarian crisis they have created, yet the UK government has done everything it can to keep the arms sales flowing,” said Sarah Waldron, a spokesperson for the Campaign Against the Arms Trade (CAAT).

The published value of UK arms export to the Saudi-led coalition since the beginning of the war is £6.9 billion, and CAAT estimates that the real value is over £20 billion.

Between January 2015 and December 2019, the British government approved 385 licenses for the sale of arms to Saudi Arabia. The UK Government has confirmed that the Saudi-led coalition attacked Yemen with weaponry that was manufactured in the UK, including Typhoon and Tornado fighter planes, Paveway bombs, and Brimstone and Stormshadow missiles.

The British government has also admitted that precision-guided weapons have also been used in the war on Yemen.

The Mwatana’s 2019 report “Day of Judgement: the role of the US and Europe in civilian death, destruction, and trauma in Yemen,” dissects the details of UK weapons and attacks on civilians in Yemen including an attack on a community college, warehouse, and multiple factories.

Days ago, the Yemeni Armed Forces announced “carrying out a qualitative military operation, Yemen Hurricane, in response to the escalation of aggression against the country.” The operation targeted Abu Dhabi’s airport, the oil refinery in Mussafah in Abu Dhabi, and several other sites in the UAE.

Ali Al-Qahoum, a member of Ansar Allah Political Bureau, blessed the Yemeni operation in the UAE depth, saying that “this operation and others will continue as long as the aggression and siege continue with strategic goals further ahead.”

The complaint was submitted on behalf of the Yemeni NGO, the Legal Center for Rights and Development, which is based in the Yemeni capital, Sanaa.

The megaphones of human rights campaigns and global petitions against the war on Yemen must be amplified, keeping in mind that the enemy is not Ansar Allah, neither is it the Palestinians, nor is it the Lebanese, or the Chinese, or the Russians. The true enemy of the West is the Axis of Resistance. Time has proven that a refusal to kneel to the demands of the West is all it takes to become an enemy.

If the cries of the virtuous remain unheard and the coalition and governments complicit in the massacres refuse to listen, then the Yemeni people surely will be left with the only other alternative. It was, is, and will always be the only key that unlocks the shackles of oppression and brutality; Resistance.

And one thing will certainly never change. The Saudi royals, no matter how enshrined in gold, can never cleanse themselves of the crimes they have committed against humanity, for conscience is the one thing they cannot buy.