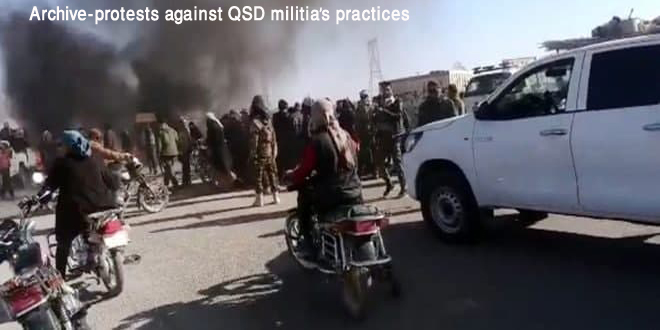 The popular factions targeted with machine guns and RPGs military points of QSD militia in al-Busayrah city and al-Shuhail town, Deir Ezzor eastern countryside, amid reports of causalities among the militia’s gunmen, in addition to destroying parts of those points, local sources told SANA.

QSD militia brought in reinforcements to the area, in coincide with the US occupation aircraft dropping flare bombs, as well as sounds of explosions were heard in the area, the sources added.

Over the past two years, hundreds of QSD militia gunmen were killed and wounded in attacks targeted their positions, and movements within the areas of their deployment, with the support of US occupation forces in the Syrian al-Jazeera region.