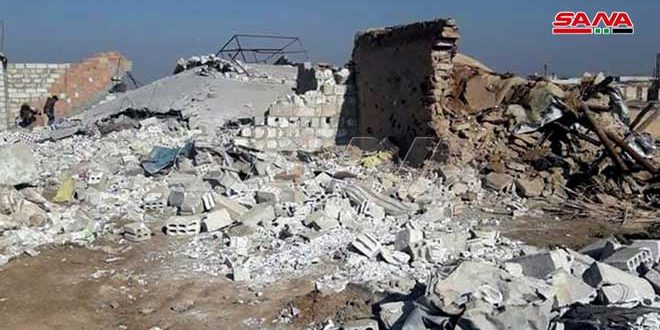 Hasaka, SANA- The QSD militia, backed by the American occupation forces, raided al-Zohour and Ghwairan neighborhoods and a number of villages near Hasaka City under the pretext of searching for fugitives from the Industrial Secondary School Prison and kidnapped a number of civilians.

Groups of the QSD militia raided this morning the western neighborhood of Ghwairan under the pretext of searching for fugitives from the Industrial Secondary School Prison and broke into homes and kidnapped a number of men and young men and took them to an unknown destination, local sources told SANA reporter.

The sources indicated that the raid campaigns carried out by the US-backed militia expanded towards the villages located on the eastern and southeastern sides of the prison, in addition to a number of villages in the western countryside and kidnapped a number of other citizens.

“The raid campaign was accompanied by tightening inspection procedures at the militia’s checkpoints, in addition to its attempt to close the neighborhood and impose a total curfew in the area,” the sources said.

Over the past few days, the US occupation forces bombed buildings and facilities in the vicinity of the Industrial Secondary School Prison under the pretext of pursuing fugitives from the prison in Ghwairan neighborhood in Hasaka City.