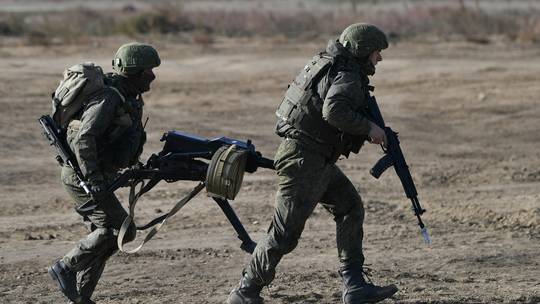 Russian tanks and troops could be just weeks away from rolling across the Ukrainian border and sparking an all-out conflict in Europe, one of Kiev’s top generals has alleged.

In an interview published in British newspaper The Times on Saturday, Lieutenant-General Alexander Pavlyuk said that the incursion could be staged in the days following the Winter Olympics, due to be held in Beijing next month. February 20 “is a date that concerns us,” he went on, arguing that Russian President Vladimir Putin would likely want to avoid offending China by overshadowing the games with a war.

In addition, the date marks the end of planned Russian-Belarusian joint military exercises on the border with Ukraine.

Pavlyuk, who served in the Soviet Armed Forces in the final years of the USSR, said he is confident in his troops’ ability to fight against Russia, despite the larger nation’s greater military capabilities. “We have about half a million people who went through a war in this country in which they have either lost someone or something,” he explained. “Half a million who have lost the blood of a relative, lost their homes or lost their friends, and they are ready to tear apart Russians with their bare hands.”

“If our intelligence manages to predict the direction of the main Russian hit, after the first big losses they won’t go further,” he predicted. “Putin realizes that after heavy casualties his army may stop by itself. You cannot trust intuition in this. It is about cold calculation.”

Ukrainian and Western officials have been warning for months that they fear an imminent invasion by Russia, and have pointed to Moscow’s troop movements near its border with Ukraine, where over 100,000 Russian soldiers are reported to have gathered. The Kremlin has repeatedly denied that it has any aggressive intentions, insisting that it is simply moving forces within its own territory, and has called for security agreements with NATO, the US-led military bloc.

However, despite Pavlyuk’s warning, Ukrainian President Volodymyr Zelensky told citizens in a televised address that the risk of an invasion had not risen. “There is more hype about it now,” he added. On Monday, the secretary of Kiev’s National Security Council, Alexey Danilov, also sought to downplay the threat, calling it “panic” fomented for “geopolitical and domestic” reasons in the West. “The buildup of Russian troops isn’t as rapid as some claim,” he said.