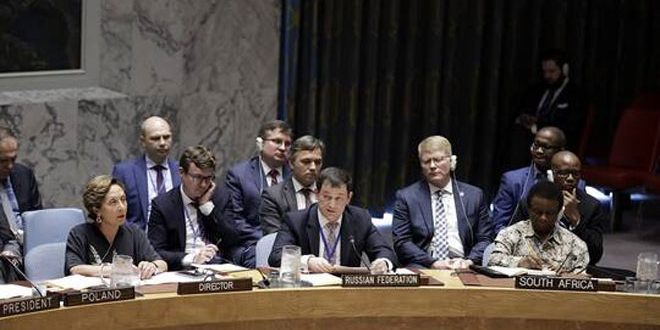 US continues to support terrorists in Syria, Russia says

New York, SANA- The Russian mission to the United Nations has affirmed that Washington continues to support and enhance the capabilities of the terrorists of “Hay’at Tahrir al-Sham” terrorist organization in Idleb, northern Syria.

“Under the pretext of helping the Syrians who are forcibly detained by the terrorists of (Hay’at Tahrir al-Sham) in Idleb as human shields, American diplomacy supports these terrorists at the expense of American taxpayers… The United States also spares no effort to beautify the image of the beheaders in Idleb and present them as an alternative to the legitimate government in Damascus,” the mission said in a statement cited by Russia Today website.

The statement indicated that the United States “not only occupies al-Tanf region, but also the entire region of northeastern Syria,” stressing that Washington must “withdraw from the lands it occupies illegally and stop looting the country, from which it transfers tankers transporting oil that had been extracted from its lands.”

The statement called on the US to fulfill its obligations regarding the operation of the cross-border humanitarian aid delivery mechanism for Syria.

It noted that “the UN Security Council resolution means the fulfillment of a number of obligations, primarily by the United States after Russia fulfilled its promise and agreed to extend the work of cross-border mechanism for another 6 months…but the American side has shown itself unconvincingly during the past six months…therefore the remaining six months is an excellent opportunity to rectify the situation.”

In July of last year, the UN Security Council adopted a resolution to extend the (Cross-Border Aid Delivery Mechanism) for Syria through one border crossing for a period of six months, with the extension to take place later for another six months ending on July 10, 2022, based on a report by the UN Secretary General on transparency in aid delivery operations and progress of cross-line access.

Syria considered that the Western countries focused their efforts only on extending this mechanism that serves their agendas reiterating their indifference to the suffering of the Syrian people and their continued targeting of Syria through this mechanism and their insistence on violating Syria’s sovereignty and besieging its people.

“The United States would rather spread lies about Ukraine than express its support for Security Council Resolution 2202, which approved the Minsk Accords package of measures as an international legal basis for resolving the crisis and imposed on Kiev a number of obligations it had been evading for seven years,” the statement read.

It added that “The United States, instead of dialogue and searching for common ground, is adopting a devastating mistake by expressing biased positions that have nothing to do with reality,” noting that Washington and NATO “flooded Ukraine with weapons.”