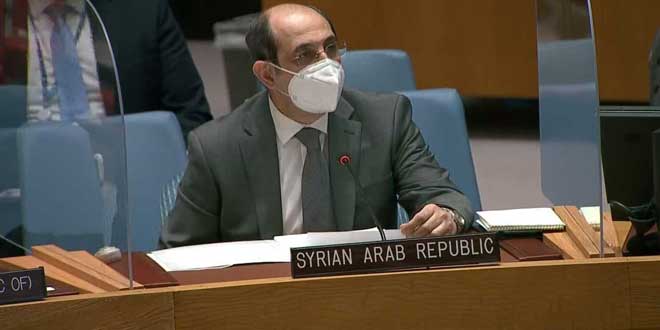 Sabbagh: Events in Hasaka an attempt by Washington to recycle Daesh terrorist organization, justify remaining of its forces

New York, SANA- Syria’s Permanent Representative to the United Nations, Ambassador Bassam Sabbagh, stressed that the recent events in Syrian city of Hasaka come in the framework of Washington’s attempt to recycle the Daesh terrorist organization and justify the remaining of its forces in Syria in light of the growing local and international demands to these forces to leave the Syrian territories.

Sabbagh said on Wednesday, during a UN Security Council session, that the terrorist attack launched by the terrorists of Daesh and the massacres perpetrated by QSD militia, in addition to the destruction of the infrastructure by the US occupation aircrafts in Hasaka city, necessitate the Council to urgently consider the repercussions of these dangerous events.

The Syrian Ambassador pointed out that the events in Hasaka requires that the Council to work on ending the presence of the US forces in northeast of Syria and in al-Tanf area, stopping the sponsor of QSD separatist militia and other terrorist entities in al Tanf, al-Rukban Camp  and stopping their plundering of the Syrian natural resources and wealth.

He criticized the governments of some countries for not shouldering their responsibilities to return back their terrorist citizens and their families who are being held in camps and detention centers in northeast Syria, and to trial them and rehabilitate them on their lands in a way that put an end to their presence on the Syrian lands.

He reiterated that any discussion on the situation in Syria remains insufficient and a waste of endeavor and time as long as some Western countries continue to cover up the main challenges that Syria is facing , distract the attention from the aggressive practices that aggravate the situation in it and leave catastrophic effects on the life of the Syrian citizens.

What does it mean that the Council holds all these sessions, but does not hold a single emergency session to condemn the Israeli repeated aggressions on Syrian territory or the practices of the US and Turkish occupation forces in it ?, Sabbagh wondered, asserting that the Council is not moving to adopt a simple presidential or press statement that explicitly and unequivocally condemns all these violations of the principles of international law and the provisions of the UN Charter.

Sabbagh called for the need for  that the Council to work to enforce the implementation of its resolutions and other UN resolutions related to the occupied Syrian Golan to end the Israeli occupation, stop its schemes to build thousands of new settlements in it , and to oblige “Israel”, the occupying power, to stop its repeated aggressions against Syrian territories in addition to work on ending the Turkish occupation of the lands north and northwest of Syria .

He also called for that the Council works to stop the policies of economic terrorism and collective punishment represented by the illegitimate, inhuman and unethical coercive measures imposed by the US and the European Union on the Syrian people and which have affected various aspects of their livelihood, particularly in light of outbreak of the Covid-19 pandemic and severe climate change .

Sabbagh reiterated Syria’s commitment to a political solution based on national dialogue, owned and led by a Syrian leadership, that meets the aspirations of the Syrian people and guarantees the full commitment to Syria’s sovereignty, independence and territorial integrity.