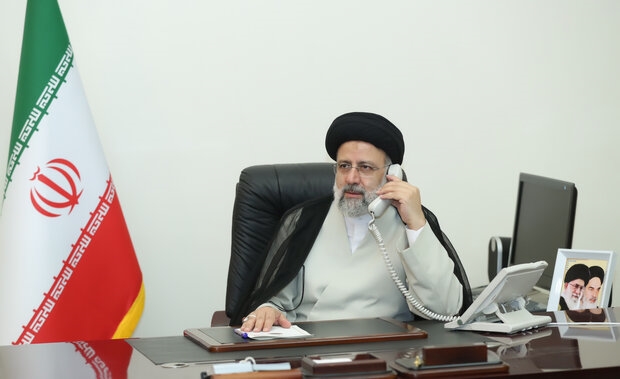 The Iranian president and his French counterpart touched on the Vienna talks, the war on Yemen, and several regional files.

ranian President Ebrahim Raisi and his French counterpart Emmanuel Macron discussed Sunday the Vienna talks, the situation in Yemen, and the country’s relations, as well as several regional topics during a phone call.

The call comes a day after the EU mediator said the latest negotiating round in Vienna had been put on pause while calling for “political decisions” to break the deadlock.

Raisi stressed that Iran “has shown its will and seriousness to reach an agreement in the negotiation process.”

The Iranian president pointed out that “any effort by the other side in this regard should include the lifting of sanctions, verification, and valid guarantee.”

He also called on the international community to increase its role in ending the humanitarian crisis in Yemen and the siege imposed on Yemenis, emphasizing that intra-regional solutions are key to stability and security in the region.

For his part, French President Emmanuel Macron acknowledged that Tehran was “rightful” not to trust Washington after withdrawing from the 2015 nuclear agreement, which led to the current crisis.

He stressed the “need to accelerate” efforts to achieve progress in the Iranian nuclear talks.

In a statement, the French presidency pointed out that Macron “has reiterated his conviction that a diplomatic solution is possible and imperative and stressed that any agreement will require clear and sufficient commitment from all the parties.”

It is noteworthy that in early December, the investigative French website Disclose revealed that France delivered tens of thousands of arms to Saudi Arabia, the UAE, and Qatar during President Francois Hollande’s reign in 2016, despite knowing that they would be used in the war on Yemen.

The website quoted “secret defense documents” that “since 2016, France has allowed the delivery of about 150,000 shells” to two of its Gulf allies.

Diplomats have been meeting in the Austrian capital in the search for a breakthrough to revive the 2015 deal involving Iran, the US, Britain, China, France, Germany, and Russia.

Raisi and Macron discussed strengthening the Iranian-French relations as well as the recent developments in the region, including the situation in Lebanon.