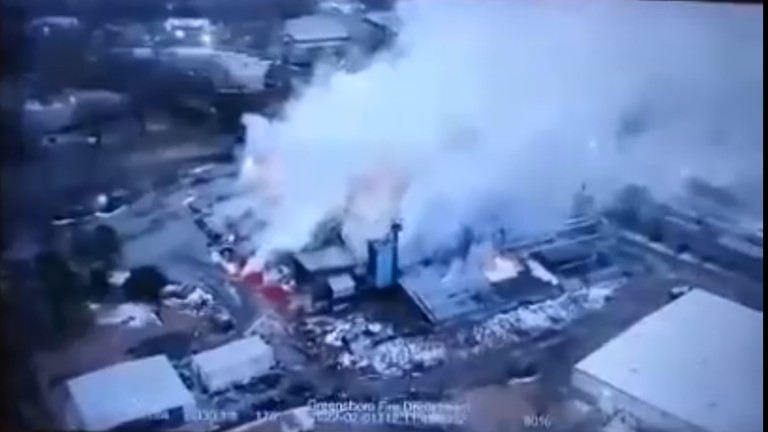 People living in the vicinity of a fertilizer business in Winston-Salem, North Carolina were ordered to evacuate

After hours spent battling a blaze at a fertilizer plant in North Carolina, firefighters warned on Tuesday that the facility could explode at any moment due to the large quantities of ammonium nitrate stored on site. The fire has also produced a significant amount of smoke and fumes, which pose a serious health hazard if inhaled.

Residents within a one-mile radius of the plant were told to immediately evacuate. An estimated 6,000 to 6,500 people live in the affected area of Winston-Salem, according to local news outlets.

The fire broke out on Monday evening at around 8pm local time. City authorities confirmed that several small explosions were heard at the Weaver Fertilizer Plant as the flames spread.

The plant building collapsed as the blaze spread out of control. Fire teams had to be pulled back from the facility because they had no safe way to prevent the heat from reaching the stockpiles of the explosive chemical, which amount to anywhere between 300 and 600 tons, according to firefighting officials.

“We fought the fire for two hours and the fire extended into a rail car behind the structure. Once the rail car became involved, we were unable to get water to the location,” Battalion Chief Patrick Grubbs told the local Fox affiliate.

Crews were driving through the evacuation area throughout the night, urging local residents to leave immediately, and the city has opened a temporary shelter for those who have nowhere else to go. No injuries have been reported amid the emergency.

Authorities also relocated inmates from the Forsyth Correctional Facility, which is located within the blast threat zone, to an alternative location. The hazard is expected to persist for at least 48 hours.

As of Tuesday morning, firefighters were more optimistic about the chances of securing the ammonium nitrate. As they pulled out, fire crews left behind an unmanned truck hooked up to a hydrant to pump water onto the smoldering ruins of the plant to keep temperatures down.