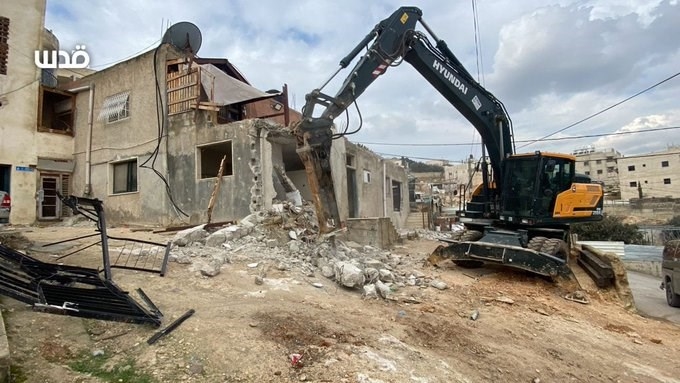 The Israeli occupation authority continues the demolition of Palestinian homes, and forces two brothers to demolish their own homes in Jabal Al-Mukabber.

Eyewitnesses said that the occupation’s municipality forced the two brothers Mohammad and Basem Shqeirat to demolish their homes in Jabal Al-Mukabber, and Mohammad Obeid from Al-Quds to demolish two homes under construction in the town of Al-Issawiya in occupied Al-Quds.

Under the protection of Israeli occupation forces, settlers attacked young girls from in the Sheikh Jarrah neighborhood east of occupied Al-Quds. The IOF did nothing to stop the settlers, who were pushing and hitting the girls, and only moved to protect the settlers from harm.

Al Mayadeen‘s correspondent  reported on January 21 that Israeli settlers in the Sheikh Jarrah neighborhood in occupied Palestine seized the property of the Salem family and propped up a fence around it under the protection of the Israeli occupation police.

A video on Twitter showed the settlers breaking the belongings of the family and instigating confrontations.

Our correspondent said the settlers arrived under the leadership of Arieh King, one of the leaders of settlements and deputy mayor of occupied Al-Quds. A woman residing in occupied Al-Quds present at the scene accused King of beating her and breaking her arm.