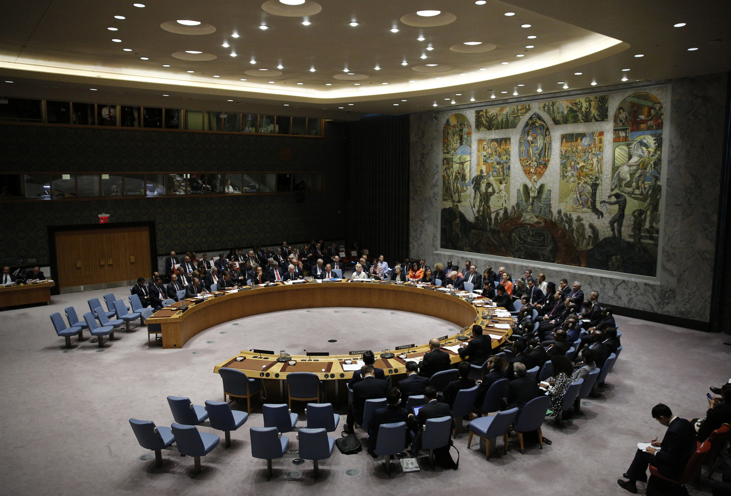 US calls for emergency SC meeting regarding N. Korea

The US is calling for an emergency meeting of the UN Security Council to discuss North Korea’s latest missiles test.

The United States has requested an emergency meeting of the United Nations Security Council on  Thursday regarding  North Korea, which earlier tested its most powerful missile since 2017, according to diplomatic sources.

In a statement, the US State Department indicated that the US envoy in charge of North Korea, Sung Kim, had discussed the recent missile test with Japanese and South Korean officials.

State Department Spokesperson Ned Price said that Sung Kim denounced the launch and considered it a violation of Security Council resolutions and destabilization of the region.

In his talks, he reiterated the United States’ commitment to “defending” South Korea and Japan.

It is noteworthy that it is up to Russia, which holds the rotating presidency of the Security Council this February, to confirm the holding of the session, which is supposed to be closed.

A diplomat who spoke on condition of anonymity expressed hope that the Council would be able to take a “unified” position emphasizing that the Council should urge North Korea to respect the resolutions of the UN Security Council.

The diplomat pointed out that the North Koreans are making progress regarding ballistic missiles, claiming they possess several nuclear weapons and have conducted more than 60 lab experiments.

On Sunday, Pyongyang announced that it had launched its most powerful missile since 2017, a medium and long-range surface-to-surface ballistic missile Hwasong-12.

Sunday’s missile launch was the culmination of a series of North Korean tests that have raised fears that Pyongyang will resume its nuclear tests or launch ICBMs.

In 2017, the UN Security Council passed 3 resolutions imposing new tough economic sanctions on Pyongyang over its nuclear and missile tests.

Jan 27- North Korea launched two suspected ballistic missiles into the Sea of Japan, the sixth round of weapons launched this month, according to South Korea’s military.

The Joint Chiefs of Staff of South Korea said the weapons, which were likely short-range, were launched from an eastern coastal area, without specifying how far they flew.

Jan 17- North Korea launched two suspected ballistic missiles into the sea, making it the fourth launch amid stalled dialogue with the US and Covid-related border restrictions.

According to a statement by the Joint Chiefs of Staff of South Korea, the missiles were launched four minutes apart, most likely from a region near Suhan, which is home to Pyongyang’s international airport. The statement added that they traveled approximately 380 kilometers at a height of 42 kilometers and landed in the country’s northeast waters.

“A firing drill for checking and judging the proficiency in the action procedures of the railway-borne missile regiment of North Phyongan Province took place on Friday,” KCNA reported.