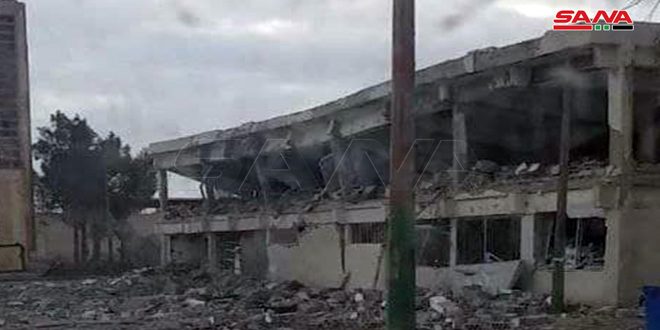 Hasaka, SANA-The US occupation backed-SDF militia has continued its violation against the locals as it prevented on Sunday 2,500 students of Agriculture Faculty in al-Kallasa neighborhood, Hasaka city from taking their exams.

Dr. Jamal al-Abdullah, Director of al-Furat University branch in Hasaka, said that SDF militia prevented 2500 male and female students, the teaching staff and the administrative cadre from entering the faculty.

He noted that the university branch is trying to solve the problem of preventing the students from taking their exams.

Al-Abdullah added “despite all the difficulties, the university branch resumed university exams in the colleges and institutes today, as places were secured for students of the Faculties of Civil Engineering and Economics after they were destroyed by the bombing of the American occupation under the pretext of pursuing fugitives from the Industrial Secondary School Prison.”

al-Furat University Hasakah SDF Syria US_ARMY USA
Previous ArticleReport: How the UN and Saudi Arabia are complicit in the FSO Safer crisis
Next Article The world mourns the death of Rayan