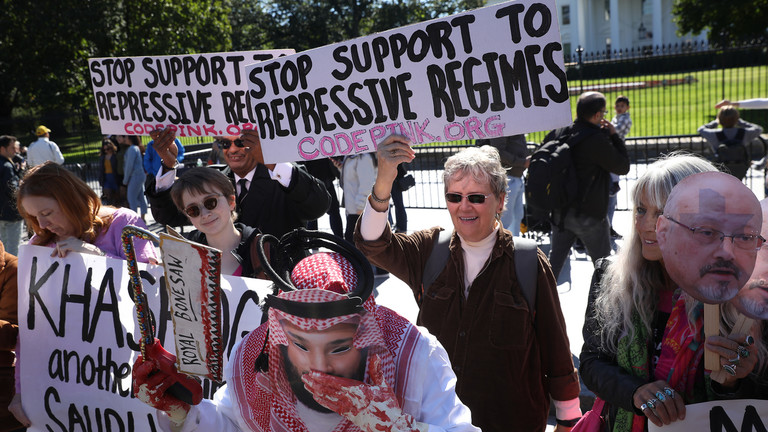 Spotify appears to have censored an old episode of the Joe Rogan Experience show over criticism voiced in it against Saudi Arabia, the guest featured in the show has alleged. Kyle Kulinsky pointed out that the Arab kingdom is a promising new market for the audio streaming company.

Kulinski, who hosts his own ‘Secular Talk’ show on YouTube, has been invited to Rogan’s on several occasions throughout the years. The episode that got axed by Spotify last week was aired in October 2018. Among the contemporary news that he and Rogan discussed live on air was the murder of dissident Saudi columnist Jamal Khashoggi. Many people believed from the start that the hit was ordered by Saudi Arabia’s crown prince, Mohammed bin Salman. Riyadh tried and sentenced a group of government operatives, who, the kingdom claimed, had gone rogue before killing the self-exiled Saudi reporter.

The guest of the Rogan show outlined the circumstances of Khashoggi’s death at the Saudi embassy in Istanbul, which were known by that time. Then he ramped up criticisms of Riyadh for allegedly committing war atrocities amid its devastating military intervention in Yemen and other misdeeds.

Rogan “didn’t use any racial slurs in the episode,” Kulinski assured followers on Twitter, adding that “Spotify just happened to expand into the Saudi market at the exact time that coincides with the banning.”

He cited a recent report by Reuters, which explained how the controversy over Rogan’s podcast could affect Spotify’s market value and its plans to conquer new markets. The Swedish company “expanded its paid podcast subscriptions in 33 more markets and enabled podcasts for users in Russia, Egypt and Saudi Arabia,” the agency said.

Spotify has felt pressure from local competition in the Arab world recently. Anghami, a UAE-based rival streaming service, soared more than 80% in its Nasdaq debut last Friday after a $220 million merger. Meanwhile, Spotify’s shares suffered a rapid drop amid the Rogan controversy.

There has long been animosity towards Rogan’s show among some parts of the US establishment, with people criticizing him and demanding his deplatforming, for various reasons. The latest wave of anger was triggered by his hosting of controversial doctors who hold highly skeptical views about Covid-19 mandates.

As Spotify was pressured by the public and the White House, the company issued a new policy on content about Covid-19, promising to add advisories and links to “trusted sources” on the pandemic. The host himself acknowledged some of the criticism, saying he should have done a better job at inviting people with opposing views shortly after having someone controversial on his show.

The subsequent purge of past episodes was about more than just alleged misinformation. Spotify CEO Daniel Ek said it was Rogan’s decision to remove them and cited the “history of using some racially insensitive language.”

It was apparently a reference to a compilation of Rogan using the N-word in the past, which circulated on the social media after Spotify refused to deplatform his show. Rogan’s defenders responded by bringing up footage of Joe Biden using the racial slur decades ago to back the podcaster’s position that the context in which the word is said should be taken into account.

Spotify’s Ek condemned the use of the N-word, and said that, while some people would want to see more done about Rogan, “I do not believe that silencing Joe is the answer.”