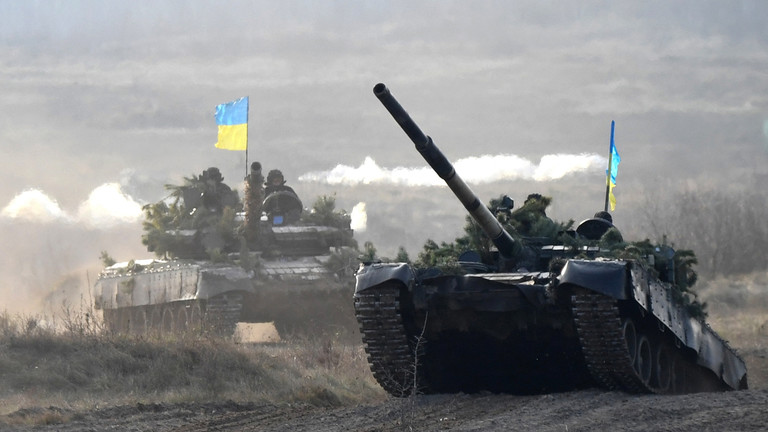 The US and Britain want a showdown with Russia, the Foreign Ministry has claimed

The American & British governments have spread reports of a possible Russian invasion of Ukraine in order to declare victory in a “heroic fight,” after the humiliation of Afghanistan, and deflect attention from their domestic problems, Moscow has claimed.

Foreign Ministry spokesperson Maria Zakharova posted the accusation on her Telegram channel on Monday, writing, “time is passing, and Russia is not attacking Ukraine. The intention of the US, who ordered this ‘music,’ and their British allies is obvious: they thought up this ‘Russian threat’ themselves, they have prepared for a ‘heroic’ fight, in order to be provocative and loudly announce their own ‘victory.’”

She went on, “here they have an opportunity to distract attention from their own political crises, and a chance to pour billions into weapons for ‘vulnerable democracy,’ and a way to restore the image of ‘invincibility’ after the fall of Afghanistan.”

Zakharova also criticized the EU for its conduct during the standoff, claiming that recent claims of an imminent Russian invasion made it less likely than ever that the eastern European nation will join the bloc. “It’s clear they’re not going to take [Ukraine] anytime soon,” she said. “And after the recent Western performance, it won’t be let into any respectable institution – who needs a country, which will soon be ‘invaded by Russia’?”

“With friends like these, who needs enemies?” she went on. “But we have said many times that the Ukrainians’ interests are the West’s lowest priority.”

American and European leaders have been warning for months that they fear Moscow could be planning an invasion of Ukraine in the near future, and have pointed to reports of a Russian troop buildup on the two nations’ border.

Russia has consistently denied that it has aggressive intentions, arguing that it is only moving soldiers within its own territory, and has called for security guarantees that would limit the expansion of the US-led NATO military bloc into Ukraine or Georgia. Western officials have said that the terms of that deal are unacceptable.