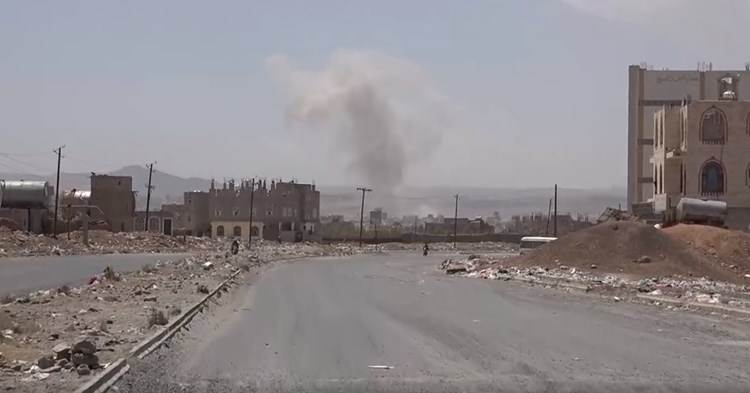 Three Yemenis were wounded, in a separate incident, by a cluster bomb dropped by the Saudi-led coalition aircraft on Saada.

A Yemeni citizen was martyred and four others were wounded, including an African immigrant, on Monday, by the Saudi-led coalition in the Al-Muftah and Al-Raqqo areas in the Munabih border district in Saada, northern Yemen.

Additionally, three civilians were injured by an explosion caused by cluster bombs left behind by the Saudi-led coalition aircraft in the Haidan District, southwest of the governorate, north of Yemen.

Al Mayadeen‘s correspondent in Sanaa reported that the Yemeni Army and Popular Committees liberated Al-Mahsam camp, north of the border district of Haradh in Hajjah Governorate.

The Saudi-led coalition launched 29 airstrikes on the Yemeni capital, Sanaa, and the governorates of Hajjah, Marib, and Al-Jawf during the past hours.

On the western coast, a Yemeni military source reported that it monitored 112 violations of the coalition forces in Al-Hudaydah, including 36 violations by artillery shelling and 63 violations by various bullets.

The Executive Center for Mine Action in Sanaa indicated that there are 400 million square meters contaminated with cluster bombs, mines, and remnants of war in Al-Hudaydah Governorate, 90% of which are residential areas, adding that in last January, more than 2,500 cluster bombs and mines were destroyed.

The head of the Prisoners’ Committee in the Sanaa government, Abdul Qadir Al-Mortada, confirmed that 10 prisoners of the Yemeni Army and Popular Committees were released in exchanges with local understandings from several fronts.

It is noteworthy that, a few days ago, the Saudi coalition aircraft targeted Sanaa International Airport, north of the Yemeni capital, with four raids, after repeatedly targeting several Yemeni areas with raids and artillery shelling.