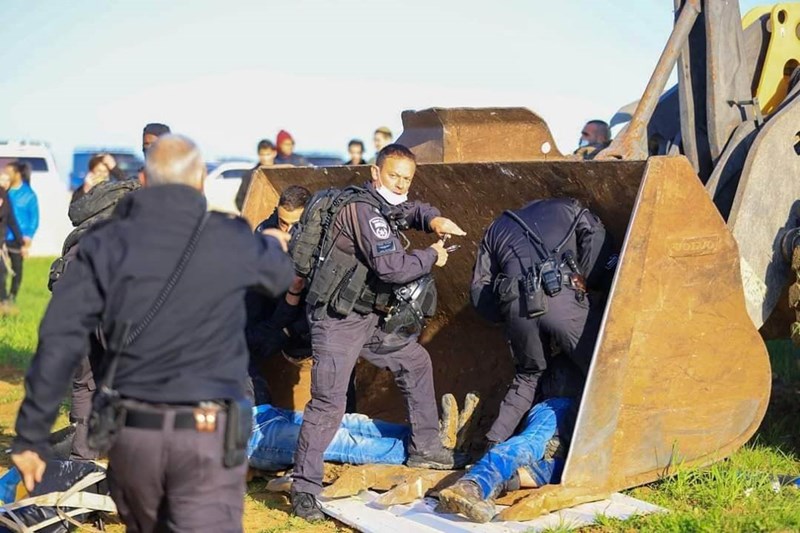 Palestinians succeeded in preventing settlers from establishing a new settlement outpost on Arab al-Zayyadna village’s lands, near Rahat in the al-Naqab.

Palestinians of Al-Naqab succeeded in preventing Israeli settlers from establishing a new settlement outpost on Arab Al-Zayyadna village’s lands, near Rahat town in the Al-Naqab.

Al Mayadeen correspondent reported that the Israeli occupation police evacuated the settlement outpost that was established at dawn today in the Al-Naqab, after dozens of settlers stormed the village of Arab Al-Zaydna, and set up a group of tents in the place.

According to the Israeli media, dozens of Rahat residents arrived in the vicinity of the place and protested the establishment of a new settlement next to their residence. Palestinian activists published calls on social media to reach the area.

Activists on social media shared footage documenting the tense atmosphere in the place during the Israeli police evacuation of the outpost.

Recently, the Al-Naqab region witnessed intermittent protests and confrontations between residents and the Israeli occupation police, in rejection of the Israeli aggression against them, the repeated demolition of their homes, and the attempt to evict them.

In the past few days, the Israeli authorities demolished, for the 197th time, the Palestinian village of Al-Araqib, located in the Al-Naqab region, whose homes are made of wood, plastic, and tin, and inhabited by 22 families.