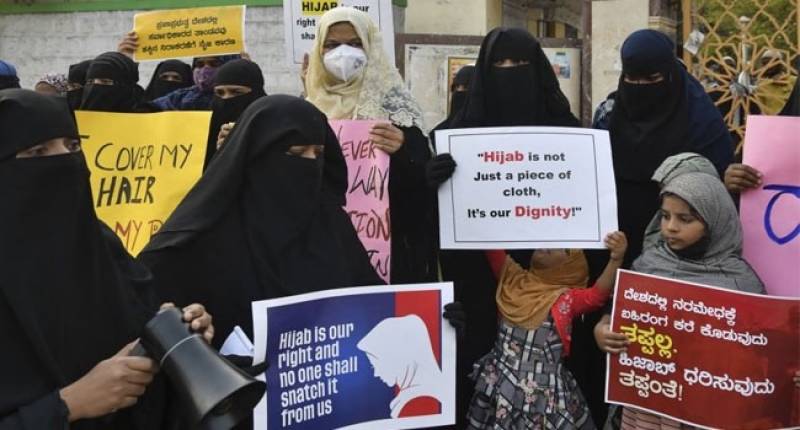 India became free from the clutches of Britishers in 1947 and freedom fighters who fought against British laid down the foundation of a secular, scientific and vibrant India. Though Constitution of India clearly gives freedom to followers of all religions to follow their religions as per teachings of that religion, but attempts are continuously made to force Muslim community to stop following their religion. Every aspect of Muslim life is under scrutiny since the right wing Bhartiya Janta Party won the parliamentary elections in 2014 and attempts are made by right wing organizations to force Muslim to follow their dictates’. Several Muslim have been murdered by terrorist mob on the suspicion of beef (cow meat) consumption and several others were brutally attacked and injured.

Hijab or purdah system is part of Muslim culture in Indian subcontinent and recently one of the pre university college in Karnataka state of India denied the entry of hijab wearing girls which forced the girls to start peaceful protest the authorities that are forcing them to remove the Hijab. Matter escalated as right-wing ideologues started coming to college with saffron coloured headscarves and stoles and chanting “Jai Shree Ram” to counter the protest of Muslim girls’ students who were protesting for their rights to wear the Hijab as their religious affiliations. Few girls’ students filed a petition to High Court of the State in question for their right to observe their religious obligations during their time in college.

Karnataka home minister Agara Jnanendra in his video message said, “We should all stand together as brothers, as the children of this country. Uniform is a sign of equality. Educational Institutions are not the place for practicing our religion or to showcase our costumes” as reported in NDTV. The message of home minister as such looks promising and secular in nature though it is far from the Truth. Majority of schools and colleges run by governments in India start their daily activities with some sort of devotional activities in morning assemblies and most of the time these devotional activities belong to majority Hindu community like Sholka in Sanskrit or something of the same nature. In the very same state, a headmistress had been suspended simply for allowing the Muslim students to perform their Friday prayer in School premise. Kendriya Vidyalays are schools run by government and it is mandatory for every student to recite Sanskrit Shlok, “Asto maa Jyotirgamay” belonging to Culture of Hinduism.

Since the 2014 when BJP came to power, every effort had been made to make Indian Muslim second class citizen to show them their place in society where they must follow the dictates of right-wing groups. These groups not only found involved in killing innocent Muslim but open call for Muslim genocide have been reported but government and its agencies are least interested in bringing these serious offenders to justice. A sense of despair has already been started taking place in the minds of Muslim. Muslim have been jailed and tortured for simply raising their voices for the rights enshrined in Constitution of India.