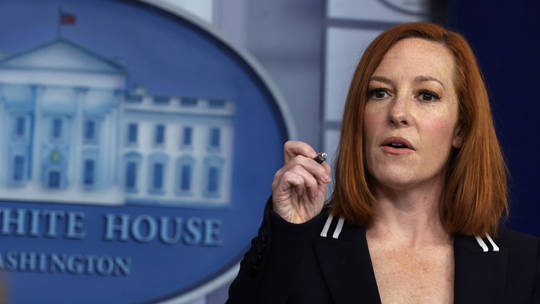 Russia and Belarus are escalating the crisis on the Ukrainian border by holding large joint military exercises, the White House spokesperson claimed on Wednesday.

Speaking at a press briefing, Jen Psaki called the drills “concerning,” while noting that she would not be drawn into making any predictions about their significance regarding a potential “invasion.”

The joint exercises, taking place over ten days in Belarus, come at the same time as Russia stands accused of placing more than 100,000 soldiers on the Ukrainian frontier, with some believing this is a sign of an impending military incursion. This claim has repeatedly been denied by the Kremlin.

Over the last few weeks, thousands of Russian troops have been shipped to Belarus for the ‘Union Resolve 2022’ drills, joint exercises which will see soldiers from both countries working side-by-side until February 20. Although Moscow has not published the exact number of its troops now located in Belarus, it has been estimated by NATO at around 30,000.

Psaki isn’t the only foreign official to comment on the exercises. On Thursday morning, Ukrainian President Volodymyr Zelensky dubbed them “psychological pressure” but claimed that it is “nothing new.”

“Today, we have enough forces and weapons to adequately defend our state without involving anyone but the military,” he said, assuring that he does not believe the stability of the country is at risk.

According to the Russian Ministry of Defense, the objective of the drills is to practice “suppressing and repelling external aggression,” as well as combating terrorism.

“During the exercise, measures will be being taken to strengthen the protection of the State border in order to prevent the penetration of armed groups of fighters, to block channels for the delivery of weapons and ammunition, and to search for, block, and destroy illegal armed formations and sabotage and reconnaissance groups of the simulated enemy,” a Ministry statement said.

Earlier this week, according to the British newspaper Financial Times, Russian President Vladimir Putin promised his French counterpart Emmanuel Macron that Moscow would withdraw its troops from Belarus after exercises were complete. Some commentators have suggested that the drills are a warm-up for full-scale conflict, and significant removal of soldiers could lead to a reduction of tensions.