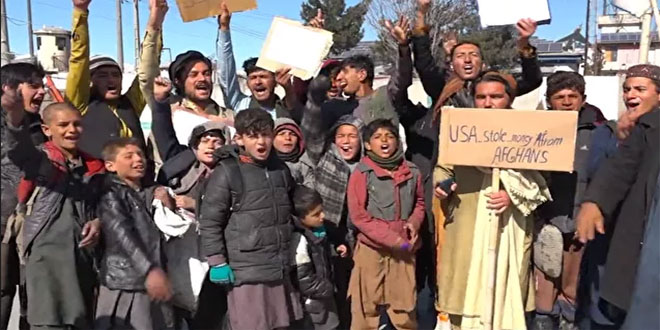 Kabul, SANA- A crowd of Afghan citizens demonstrated in the capital, Kabul, demanding the United States to pay compensations for tens of thousands of victims of its war on their country, and denouncing its decision to seize half of the Afghan Central Bank frozen funds under the pretext of financing humanitarian aid.

The Associated Press (AP) reported today that the demonstrators condemned US President Joe Biden’s order to release 3.5 billion dollars of Afghan assets owned in the United States to the families of the September 11 victims, saying that these funds belong to Afghans and therefore the US administration is stealing the money of the Afghan people.

Asked America for financial compensation for the tens of thousands of Afghans killed during the last 20 years of war in Afghanistan.

In a related context, Torek Farhadi, a financial adviser to Afghanistan’s former government, questioned the U.N. managing Afghan Central Bank reserves. He said those funds are not meant for humanitarian aid but “to back up the country’s currency, help in monetary policy and manage the country’s balance of payment.”

“These reserves belong to the people of Afghanistan, not the Taliban … Biden’s decision is one-sided and does not match with international law,” said Farhadi. “No other country on Earth makes such confiscation decisions about another country’s reserves.”

Washington had frozen the Afghan assets under the pretext of the Taliban’s seizure of power in August, while officials in the US administration claimed yesterday that they are working to ensure that the Afghan people benefit from the part that will be released, which is 3.5 billion dollars.

It is noteworthy that the United States of America announced on August 30, 2021 the completion of the withdrawal of its forces from Afghanistan after twenty years of occupying this country under the pretext of the war on terrorism.