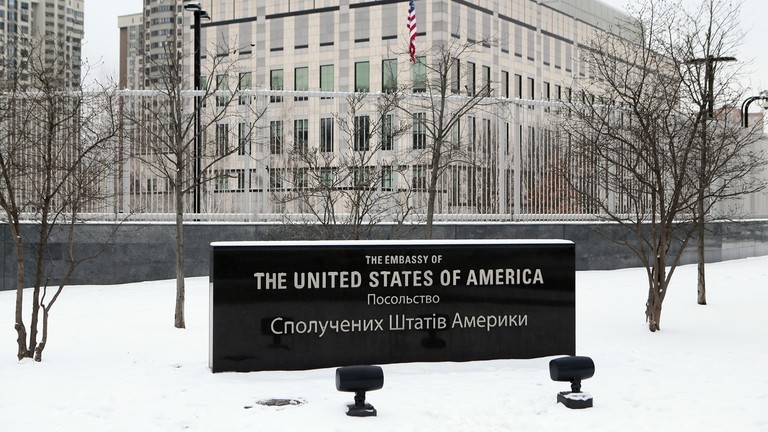 Staff evacuating the US embassy in Kiev took apart and destroyed computer systems and communication equipment used by diplomats, reportedly fearing it could end up in the hands of Russian forces after a potential invasion, just before Moscow announced that it was withdrawing some troops from near the Ukrainian border.

On Monday, US Secretary of State Antony Blinken announced that officials were “temporarily relocating our embassy operations in Ukraine from our embassy in Kiev to Lviv due to the dramatic acceleration in the buildup of Russian forces.” Lviv is in western Ukraine, further from Russia and Belarus, where Russian forces have gathered recently for joint military exercises.

The Wall Street Journal reported that State Department officials had said the evacuation involved destroying much of the hardware in the embassy, including “networking equipment and computer workstations and the dismantling of the embassy telephone system.”

Commenting on the withdrawal, officials said that they would remain “engaged” with Ukraine and that staff would return to Kiev “as soon as conditions permit.”

The evacuation was ordered amid reports from American and British officials and media that a Russian invasion of Ukraine, which Western leaders have been warning about for months, could happen at any moment, with some naming February 16 as the planned date. Moscow, however, has insisted that it has no aggressive intentions, and Foreign Minister Sergey Lavrov has called the reports “information terrorism.”

On Tuesday, the Russian Foreign Ministry announced that it was pulling some of the troops it had stationed in Belarus back to their bases in Russia, the first time that a major military drawdown has been signaled since the start of the standoff last year.

Ukrainian Foreign Minister Dmitry Kuleba said this was a sign that diplomacy was working, but emphasized that Kiev is still waiting to see the rest of the troops pulled back. “If a real withdrawal follows these statements, we will believe in the beginning of a real de-escalation,” he wrote.