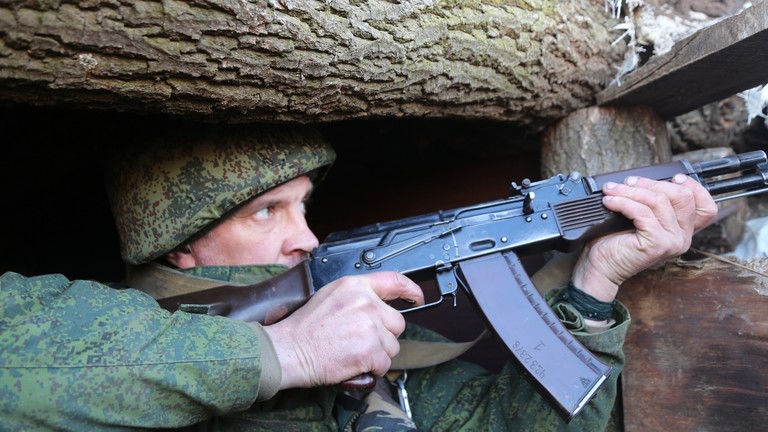 “I urge compatriots who are in the [army] reserve to come to military enlistment offices,” DPR head Denis Pushilin said in a video address. “I call on all men in the republic capable of carrying arms to stand in defense of their families, their children, wives, mothers.”

Pushilin also claimed the DPR is capable of “holding off Kiev’s aggression” and alleged that its forces are taking action in response to shelling by the Ukrainian Army.

The DPR said that Kiev began shelling villages along the frontline with heavy artillery on Thursday, and that the barrage had continued throughout Friday and on Saturday morning.

The Ukrainian military, meanwhile, accused the DPR of violating the ceasefire dozens of times on Friday and shelling multiple villages in Kiev-controlled areas.

Alexey Danilov, the secretary of Ukraine’s National Security and Defense Council, denied that Kiev was planning to attack the DPR and the neighboring LPR.

Claiming that they fear further escalation, the two breakaway regions announced they would begin evacuating civilians to Russia on Friday.

Evgeny Katsavalov, a senior government official in Lugansk, claimed that 25,000 people have previously left the LPR for Russia. He added that the authorities are in the process of organizing the evacuation of an additional 10,000 residents.

Emergency services in the DPR said that more than 6,600 people, including 2,400 children, have been evacuated as of Saturday morning, but these numbers have not been verified by Moscow.