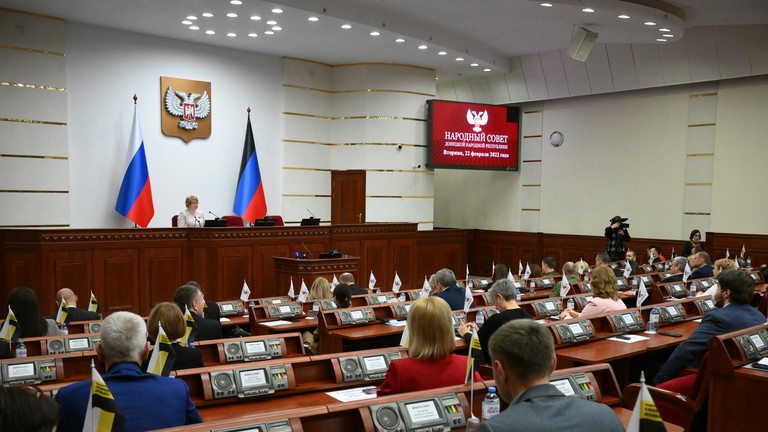 The breakaway republics in Donetsk and Lugansk have ratified a friendship and assistance treaty with Moscow, formally opening the door to receiving military and financial support, after Russian President Vladimir Putin signed a decree recognizing their independence.

In statements released simultaneously on Tuesday, the parliament of the Donetsk People’s Republic and Lugansk’s People’s Council declared that the decision to ratify the ‘Treaty of Friendship and Cooperation with the Russian Federation’ had been passed unanimously by both assemblies.

The day before, Putin held a televised national address in which he said “I deem it necessary to make a decision that should have been made a long time ago” and to “immediately” recognize both as sovereign states. The move, he said, was in response to years of fighting in Ukraine’s war-torn east and Kiev’s attempts to “drag foreign states into conflict with our country” with its efforts to join NATO.

The Russian parliament will now consider the agreements on Tuesday and a parliamentary commission on international affairs has already recommended ratifying the treaties. Last week, prior to Putin announcing his decision to recognize the breakaway regions, 351 MPs backed a motion calling on the Kremlin to support their independence. Just 16 lawmakers voted against the resolution, and one abstained.

Under the terms of a separate order signed by Putin on Monday, the Russian armed forces have been instructed to begin “peacekeeping operations” on the territory of the two regions, citing a request for military support from their leaders.

Leaders of the breakaway republics and officials in Kiev have accused each other of carrying out heavy shelling along the contact line for several days. Last week, Donetsk and Lugansk announced that they had begun evacuating civilians to Russia, amid what they claim is a sharp spike in hostilities, and have ordered the mobilization of all able-bodied men to be ready to fight in a potential conflict.

Ukraine rejects claims it is preparing to attack, with Aleksey Danilov, the secretary of Ukraine’s National Security and Defense Council, claiming that “there is an attempt to provoke our forces,” and that Kiev’s troops “can only open fire if there will be a threat to the lives of our service members.”

On Monday, Russia claimed that it had killed five Ukrainian soldiers during a firefight near the countries’ shared border. Kiev has denied that the incident took place, saying it had no personnel stationed in the area, and branding the report “fake news.”

Kiev’s top diplomat has also previously warned that Moscow affirming the autonomy of the Donbass republics would undermine existing peace accords, signed in the Belarusian capital in 2014. “If a decision is made… Russia will de facto and de jure withdraw from the Minsk agreements with all the accompanying consequences,” Dmitry Kuleba said earlier this month. However, in his address to the nation, Putin claimed that Ukraine had abandoned the deal, insisting that “they are not interested in peaceful solutions.”