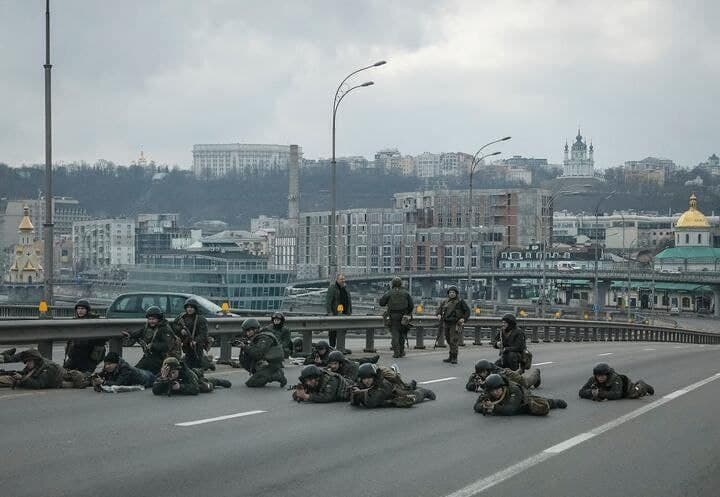 Near Kiev, the offensive stopped at the Irpen-Bucha line, fighting resumed by midnight. The north-western regions of the capital, the areas of Bucha, Irpen, Vorzel and Gostomel, are now the main battlefield. According to the Russian Defense Ministry, Gostomel Airport remains under Russian control.

At the same time the level of insecurity in Kiev was significantly increased by the decision of the local authorities to distribute weapons to civilians. The military mainly did not ask for any documents or permissions to carry weapons. Various spots of distribution were almost robbed by scared civilians as well as angry nationalists.

Long queues are seen on the streets.

Uncontrolled distribution will definitely lead to an increase in crime and looting in a city where the law enforcement agencies are not carrying out their duties anymore.

8 years of raging anti-Russian propaganda resulted in grow of nationalistic mood. Of course, a certain part of the population will turn their weapons against Russian troops, which in the conditions of modern war cannot bring military any success, but will definitely entail an increase in casualties.

“Witch hunt” began in the city. Civilians as well as servicemen are killing anyone they suspect of Russian saboteurs.

In the current situation, it may be difficult to blame those residents of Kiev who are free to use weapons against someone they consider aggressors.

At the same time, the obvious fact is that Zelensky’s regime is cowardly hiding behind the civilians.

The military equipment is deployed in residential areas in Kiev as well as in other cities.

The local authorities refused to evacuate residents from the city. Klichko called on civilians to “help the soldiers” and “to stay home”. It is now almost impossible to leave the capital. People were blocked in the railway stations.

The civil defense system in the city, which should have warned residents about the military threat yesterday or the day before yesterday, was not activated. Only syrens were heard, but no information was provided.

However, the attack was not a surprise for Kiev, as a significant part of the Ukrainian airplanes and helicopters were relocated hours before the morning attack on February 24.

Despite the fact that Kiev was well aware of the upcoming Russian operation days before it began, no measures were taken to protect civilians.