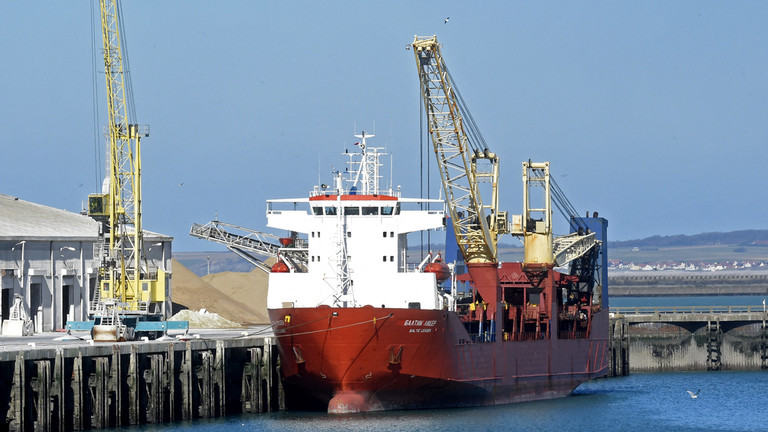 A Russian cargo ship has been intercepted in the English Channel by French authorities on suspicion of violating EU sanctions imposed following Moscow’s military offensive in Ukraine.

The vessel, which departed from Rouen, was transporting cars to St. Petersburg when it was redirected to the port of Boulogne-sur-Mer in northern France in the early hours of Saturday morning.

The press office for the Maritime Prefecture of the Channel confirmed to the media that the ship was “strongly suspected of being linked to Russian interests targeted by the sanctions.”

According to the statement, during a routine patrol of the channel, police “came across the Russian boat, an inspection aboard was made and the boat was ordered to return to the French port” for further investigations.

The Russian embassy in France confirmed the detention of a vessel.

”On February 26 at 07:00 in the territorial waters of France near the city of Boulogne-sur-Mer, the Russian cargo ship ‘Baltic leader’ was detained. Its crew lists 19 people,” the diplomatic mission’s representative told RIA Novosti.

The embassy said it plans to send a note of protest to the French Foreign Ministry and to take measures to protect the crew.

According to media reports, the 127-meter-long vessel had permission to sail in French waters. Following Russia’s military attack on Ukraine, launched on Thursday, the US, EU, UK and others have imposed harsh economic sanctions with the aim of creating “massive and severe consequences” for Moscow.

Moscow considers the sanctions unlawful and unjustified and claims that the military action has been the only option available to protect the Donetsk and Lugansk People’s Republics and to ensure that Russia would not be threatened by the expansion of NATO in Ukraine.