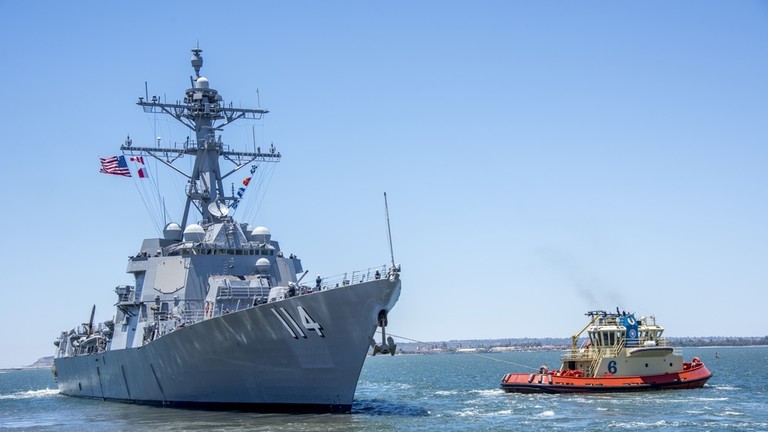 The USS Ralph Johnson, a guided-missile destroyer of the US Navy’s Seventh Fleet, sailed through the Strait of Taiwan on Saturday. The Pentagon said the exercise was a “routine” one, but amid heightened tension in Europe over Ukraine, China’s state media accused the US of fomenting conflict “on two sides of the world.”

The USS Ralph Johnson transited the strait through waters controlled by neither mainland China or Taiwan, a statement from the Seventh Fleet read. “The United States military flies, sails, and operates anywhere international law allows,” the statement continued, adding that Saturday’s sailing “demonstrates the United States’ commitment to a free and open Indo-Pacific.”

The Taiwan Strait is 180 kilometers (110 miles) wide and separates mainland China from Taiwan, which Beijing considers Chinese. It is situated at the far north of the South China Sea, where US warships regularly conduct similar sailings to challenge Beijing’s territorial claims.

The Chinese government did not immediately respond to Saturday’s sailing, but the state-run Global Times news outlet – widely considered to closely reflect Beijing’s thinking – did.

“While the ongoing Ukraine-Russia tussle is intensifying, the US military is attempting to demonstrate its capabilities to stir up trouble on ‘two sides of the world’, meaning in Europe and Asia, and by doing so it sent a wrong signal to the ‘Taiwan independence’ forces,” the Global Times stated, citing Chinese analysts.

China hawk politicians in the US have claimed that Beijing may soon move to retake Taiwan, arguing that Beijing could strike while Washington’s attention is fixed on Ukraine. Taiwan’s Defense Ministry warned on Thursday that nine Chinese aircraft entered its air defense zone and were tracked, but the alleged incursion was smaller in size to similar sorties by China in recent months.

The Global Times has also accused “radical US politicians” of “exploiting the Ukraine issue to stir up troubles on the Taiwan question” and “embolden the forces that support secessionism on the island.”