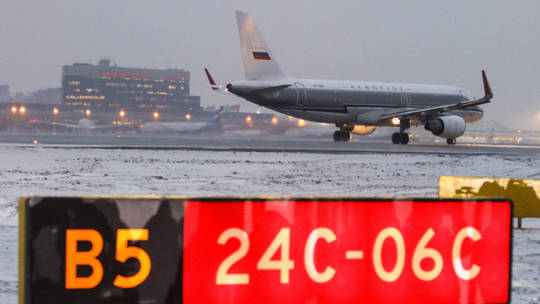 “Due to Russia’s further invasion of Ukraine, an increasing number of airlines are cancelling flights into and out of Russia, and numerous countries have closed their airspace to Russian airlines,” the advisory continued. “In addition, air space around southern Russia is restricted and a number of airports in the area have closed.”

The advisory also cautioned Americans against traveling to Russian districts bordering Ukraine, or attempting to travel by land across the border.

The advisory was issued hours after the US authorized non-emergency personnel to leave its embassy in Moscow, and a day after the EU closed its airspace to Russian flights. The UK and Canada also shut down their skies to Russian aircraft, while Russia responded by barring flights from 36 countries, in a tit-for-tat move.

The State department has advised against all travel to Russia for more than a month now, and last week issued a notice warning of potential terrorist attacks in Russian cities, including Moscow and St. Petersburg. Russian Foreign Ministry spokeswoman Maria Zakharova asked the US to show evidence of these supposedly impending attacks, asking Washington, “How is this to be understood?”

Meanwhile in Ukraine, Russian and Ukrainian troops have engaged in battles in multiple cities, including Kharkov, Mariupol, and the outskirts of Kiev. Talks were underway in Belarus between Ukrainian and Russian officials on Monday afternoon.