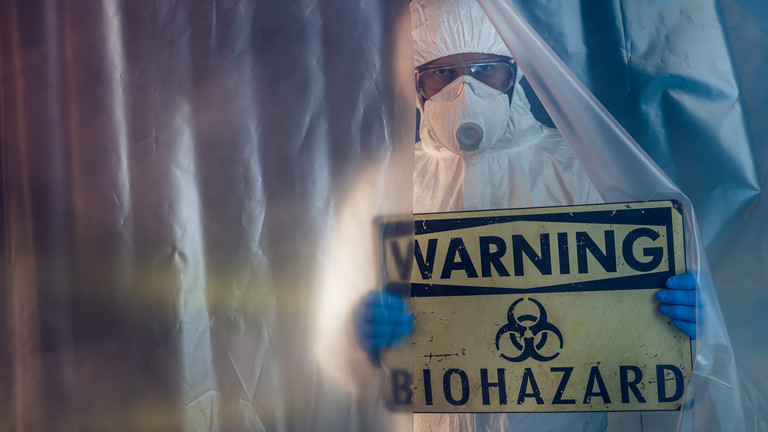 Beijing wants US to ‘open biolabs’ to international experts

If Pentagon-funded research is as benign as Washington claims, why not subject it to scrutiny? – Chinese Foreign Ministry

Washington should prove that the global network of biolabs funded by the Pentagon does not conduct nefarious research by subjecting the facilities to international scrutiny, Chinese Foreign Ministry spokesman Zhao Lijian said during a daily briefing on Monday.

“If the US wants to prove their activity is benign, why not open those biolabs to independent examination by international experts?” he asked.

There are dozens of biolabs funded by the US through the Defense Threat Reduction Agency (DTRA) scattered throughout the globe. The US insists they act as early warning outposts collecting data on potentially dangerous infections in various parts of the world.

Skeptical nations, including China and Russia, believe the labs may also serve darker purposes by conducting bioweapon studies on behalf of the US. The work is allegedly conducted on foreign soil for extra secrecy, and to circumvent Washington’s international commitments to refrain from this type of military research, critics claim.

The network was brought back into the spotlight this month amid Russia’s military attack against Ukraine. Moscow released documents allegedly proving that Washington ordered labs in Ukraine to destroy samples of highly dangerous pathogens and other materials. US officials offered an array of explanations in response.

US Under Secretary of State for Political Affairs Victoria Nuland confirmed under oath that Washington gave instructions to Kiev to destroy lab materials, saying her government was concerned that the research could fall into Russia’s hands.

State Department spokesperson Ned Price rejected Russia’s suspicions that the US and Ukraine were violating the Biological Weapons Convention (BWC), which bans bioweapons. He accused Russia of breaking the treaty itself by running active germ warfare research, without offering any evidence.

US Ambassador to the UN Linda Thomas-Greenfield told a UN Security Council meeting called by Russia on Friday that the US does not support bioweapons programs in Ukraine or anywhere else in the world.

White House Press Secretary Jen Psaki claimed on Wednesday that Russia may be preparing a “false flag” biological or chemical weapons attack in Ukraine to further escalate the armed conflict.

Zhao Lijian said that statements from US officials about biolabs have been “contradictory and confusing,” and the lack of clarity causes concern for Beijing. The US infamously opposed attempts in the 1990s to establish an international mechanism to verify compliance of individual nations with the BWC, he noted.

Meanwhile, the US has “for decades” been “pointing fingers at every turn, accusing other nations of failing to comply with their obligations [on non-development of weapons of mass destruction], demanding they accept verification missions and even imposing sanctions on them,” the Foreign Ministry spokesman said.

He added that Washington has double standards regarding international inspections when it denies transparency for its own research. He said the US should come clean about what the hundreds of millions of dollars – which it reportedly poured into Ukrainian biolabs – was spent on.