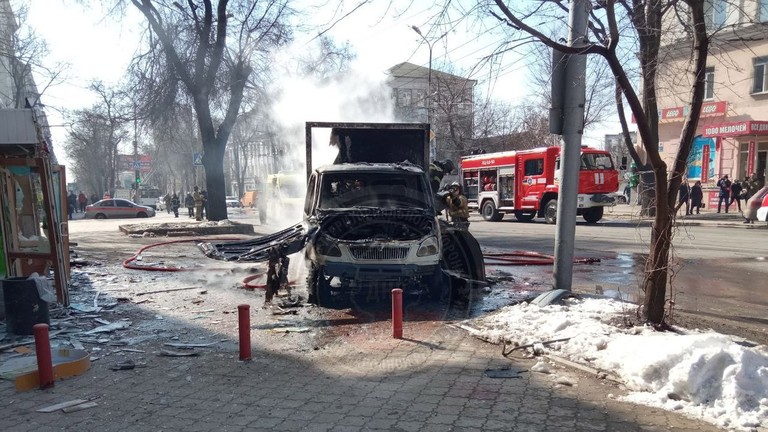 A Tochka-U ballistic missile was launched into Donetsk, the capital of the Donetsk People’s Republic (DPR), on Monday, officials said. The reported incident took place amid the Russia military campaign in Ukraine.

DPR military spokesman Eduard Basurin said the missile was intercepted and destroyed mid-air, but one of its explosive parts managed to hit the city. DPR defense officials reported that at least 17 people were killed and 28 wounded.

“If the missile hadn’t been shot down, we’d have a lot more casualties,” DPR head Denis Pushilin told the media. He added that the part of the missile fell in the center of Donetsk, not far from the main government building.

Pushilin claimed the missile was loaded with a cluster munition.

Responding to a reporter’s question whether Moscow views the incident as an act of terrorism, Kremlin spokesman Dmitry Peskov replied: “Beyond any doubt, it’s an attack on the civilian population.”

Meanwhile, Pavlo Kyrylenko, a regional Ukrainian official, accused Russia of shelling the town of Avdeevka, north of Donetsk, with Tochka-U missiles and other projectiles on Monday. He said that houses, a school, and a chemical plant were hit.

RT was unable to independently verify any of these claims.

Avdeevka is located within the DPR’s borders, but has been controlled by Ukrainian forces since 2014, when the republic broke away from the country following the coup in Kiev.

Moscow attacked Ukraine in late February, following a seven-year standoff over Ukraine’s failure to implement the terms of the Minsk agreements, and Russia’s eventual recognition of the DPR and the neighboring Lugansk People’s Republic. The German- and French-brokered protocols were designed to regularize the status of the regions within the Ukrainian state.

Russia has now demanded that Ukraine officially declare itself a neutral country that will never join NATO.

Kiev says the Russian offensive was completely unprovoked and has denied claims it was planning to retake the two republics by force.

Several rounds of peace talks have been held, but the parties have so far only managed to agree on evacuation routes from besieged cities.